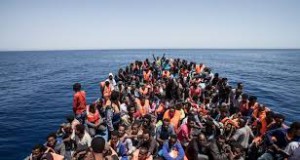 Links between human, weapons and diesel fuel smuggling are there to see, if  the EU wants to

Zwara, the westernmost town on the Libyan coast, boasts turquoise water, endless sand beaches, and delicious fresh fish. You can even sit at a beach café at night and have an espresso while gazing at the Mediterranean. Over the course of several visits in 2011-12, it seemed the most Europeanized place in Libya. But for the last three months, local sources complain that the fish stores have been empty: every fishing boat is involved in human trafficking instead. And photos of corpses of drowned migrants on those endless beaches have shocked the conscience of the world. On Sept. 19th  alone, almost 4,800 migrants were rescued off Libya. An estimated 130,000 have crossed from Libya to Europe this year to date, mainly from Subsaharan Africa.

On Sept. 28, the European Union Naval Force for the Mediterranean (EUNav) announced that on October 7 it would begin “Operation Sophia” to intercept smugglers’ ships and capture their crews, escalating from the current policy of merely tracking them. EU authorities have identified 17 Libyan boats involved in the trade. It is likely most if not all belong to citizens of Zwara.

One question is why the EU authorities made an advance announcement that gives the ship owners time to switch to other vessels. Another is why the announcement was made just as the summer smuggling season draws to a close.

The biggest question is why the EU ignores the fact that migrant smuggling is just one part of the activities of a well-funded mafia that includes not only the expected Libyan citizens, but also EU citizens.

The EU has mainly turned a blind eye to the trade that brings weapons and ammunition into Zwara for the jihadi coalition controlling Western Libya, Libya Dawn, and takes subsidized Libyan diesel fuel in exchange. By perpetuating the Libyan civil war, this trade also takes lives.

A liter of diesel fuel costs about .10 Libyan dinar or .065 euro in Libya, but upwards of a euro in Malta or elsewhere in southern Europe. The UN has banned both sides of the trade, but the EU doesn’t pay attention very often. (See this recent case of a boat impounded by Greece with weapons aboard)

On Oct. 12, the Libyan Central Bank decided to lift the subsidy on diesel and other subsidized goods in the interest of slowing the hemorrhage of cash out of the country. Fuel represents 70 – 80% of the $9 billion Libya has been spending annually on discounted goods.

Anything that will stop the flow of weapons to Libya Dawn is a good thing.  They are an unsavory lot, closely linked to Ansar al Sharia in Benghazi, the listed terror group that took part in the killing of US Ambassador Chris Stevens and three other Americans on Sept. 12 2012.  There is hard evidence that Libya Dawn funds the Benghazi Revolutionaries Shura Council, the umbrella group of terrorists that includes Ansar. Libya Dawn regularly sends shipments of weapons and ammunition by sea from Tripoli to Benghazi to re-supply Ansar and other terror groups, including IS, who are fighting the Libyan National Army there.  The internationally recognized Libyan government is based in the eastern cities of Bayda and Tobruk and controls the east and some of the south; Libya Dawn controls Tripoli and most of the coast from Misrata to the Tunisian border, including Zwara.

To this day, despite its financing of Ansar and its complicity in the smuggling trades, the UN and EU consider Libya Dawn as a legitimate negotiating partner in peace talks with the internationally recognized government. And it looks to many Libyans as though the EU does not want to act against the diesel smuggling and arms trafficking that allows the human smugglers the space to operate.

“The Italians want to stop this migrant business,” said a Zwara citizen, “Bashir,”  who is one of a small group who are discreetly acting against the smugglers. “But they don’t care about the other smuggling. We want to stop all! I have met with people from Italian embassy (to Libya, now situated in Tunis) five or six times. They know the names of all the smugglers.”

As Bashir (real name withheld to protect him) and others explain, a group of interlinked crime families, similar to Italian Mafia families and including ties to them, handles human trafficking, diesel smuggling, drug smuggling, and weapons importation.  The kingpins have to be taken down — otherwise, people who specialize in human trafficking will just shift to cocaine or weapons or alcohol smuggling for awhile. (Diesel smuggling is the only business that requires specialized ships.) Tolerating one kind of smuggling is like allowing an American Mafia family to continue to control illegal gambling and drug dealing, but to crack down only on prostitution. But many Zwara people think the Europeans don’t really care about any illicit commerce, except that which deposits unwanted migrants on their shores.

As evidence for this, Bashir points to the fact that Zwara’s smuggling king is a shareholder in and a director of a Malta company, and Malta is an EU country.

The smuggling kingpin is Fahmi Slim Mousa Ben Khalifa, aka Fahmi Slim. Slim, a dark-skinned Zwara native said to be about 45, served a few years of a 15-year sentence for drug smuggling in Gaddafi days before the revolution opened the prisons. Now he is so powerful that part of the harbor in Zwara is known simply as “Fahmi Slim’s harbor.” While he is not directly involved with human smuggling currently, locals say that he works with some of the human smugglers in other illegal ventures.

Editor’s note: an official of an international agency confirms that Fahmi Slim is involved in fuel-smuggling activities in Libya and is known to French, Maltese and Italian authorities as a person of interest.

The EU could put pressure on Slim and anyone he controls easily:  Fahmi Slim is a partner in and director of the Maltese corporation ADJ Trading Ltd. ADJ, under its old name of ADJ Swordfish, also owns a tanker called Basbosa Star that has a history of movements that suggest diesel smuggling.  As Zwara does not have an oil terminal – the nearest one is in Zawia, 100km east – any tankers that call at its port are ipso facto suspect. Asia Times editors have seen evidence linking the  Basbosa Star and its sister ship, the tanker Amazigh F, in suspicious activity.

Now, new documents (1) also show Slim’s name on a ship that is being sold with the permission of the Tripoli-based Libya Dawn anti-government. The ship, carrying the IMO number 7900522, was impounded in Misrata, Libya for diesel smuggling years ago, in 2008 or 2009.  It remained in Misrata harbor even after Gaddafi’s fall, slowly decaying, until this spring, when the Libya Dawn coalition that controls Misrata decided it wanted the ship — now derelict — removed.

The vessel is shown on the shipping website Equasis as owned by one “Benkhalifa FSM” since May 22 2015.  That is Fahmi Slim’s full legal name. Each ship has a unique IMO number from build to scrap, so it is an important way to identify ships after name changes. On Equasis, the name of the vessel numbered 7900522 is given as Tiuboda 1. Tiuboda is near Zwara, and Fahmi Slim  is chairman of a Libyan company named Tiuboda Oil Services, #41992.

On another shipping website, Fleetmon.com, the IMO number 7900522 is associated with the name Troodos – owned by an obscure Spanish company, AlvarGonzalez SA, using a Georgian flag (5). This appears to be the owner from the time when the ship was impounded.

Currently the ship is being marketed by a Mr Albarasi. He showed a prospective Libyan buyer a three page contract from the Tripoli Ministry of Transportation, stating that he, Emrajaa Embarek Abdul Hamid, bought the ship from the deputy Minister of Transportation, one Abdul Alatef Mahmod Ben Amer. On the first page, the document states that the Acting Minister gave permission for the sale on March 30, 2015.

Reached by Viber and responding to written  questions in Arabic, Mr Albarasi said he is the sole owner, that “he owns it according to a contract made with Ports and Marine Transportation” and that “nobody else has anything to do with the ship.” He also wrote, “Troodos is the name of the ship.”

Then, on Sept. 19, reached through the prospective buyer who asked not to be identified, Mr Albarasi admitted that although he had bought the ship from the Tripoli ministry, his partner, one Abdulkarim Nassraat, later sold it to Fahmi Slim, who is now the owner. (Equasis shows Slim bought the ship on May 22.) Zwara sources identify Mr Nassraat as a Zwara native. Note that the sale occurred while the Troodos/Tiuboda 1 was still a derelict ship, unable to move under its own power. This makes it look very much like a “wash” sale.

One piece of Tripoli Port (Lebanon) paperwork –in English – locates the ship, under its Fahmi Slim-registered name of Tiuboda 1, in Tripoli, Lebanon harbor on July 15, “coming from Malta.” Mr Albarasi explained in Arabic, “The ship was towed from Misrata to Malta and the engines were maintained there.” He says the vessel is currently in Beirut obtaining an inspection.

If the EU wants to put pressure on those who have the power to stop human trafficking in Zwara, Fahmi Slim is an excellent place to begin. Why was his ship allowed in Maltese waters? Why is his Maltese company allowed to conduct business?  The sale of the “Troodos/Tiuboda 1” to Mr Albarasi and its sale barely two months later to Fahmi Slim suggests that  the Tripoli anti-government works hand in glove with Slim. In this instance as in others, Libya Dawn behaves more like a criminal enterprise than a government. Isn’t it time for the EU to bring its formidable soft power to bear to stop these needless deaths by stopping the money flows to the smugglers?