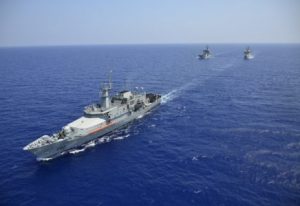 The European Union announced the launch of a new naval mission in the Mediterranean Sea, dubbed Irini, aimed at enforcing the UN arms embargo on Libya.

The new operation will start work for a year from Wednesday.

The European Council said it will have as “its core task the implementation of the UN arms embargo through the use of aerial, satellite and maritime assets.”

“In particular the mission will be able to carry out inspections of vessels on the high seas off the coast of Libya suspected to be carrying arms or related material to and from Libya,” a statement said.

It will also gather information about illegal fuel and oil smuggling from Libya and help build up the Libyan coast guard, including by training its personnel.

The EU’s previous naval mission, Operation Sophia, was set up after tens of thousands of migrants began attempting potentially perilous crossings of the Mediterranean in 2015 in search of better lives in Europe.

“Diplomacy cannot succeed unless it is backed by action. The UN arms embargo on Libya needs to be effectively enforced,” EU foreign policy chief Josep Borrell told reporters as he unveiled the operation.

He said the EU sees Irini has “an important part of the solution to contribute to a permanent ceasefire.”

Borrell said that while the operation will focus mostly on maritime surveillance, its planes, drones and satellites will be able to monitor airspace and some activities on land in, around and over Libya.