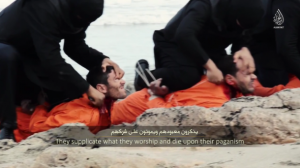 A Libyan official revealed that the authorities have dismantled a network that had carried out several terrorist attacks in the country, mainly the beheading of 21 Coptic Christians from Egypt in Sirte in February 2015, like reported by aawsat.com.

Sadiq Al-Sour, head of investigations for the Attorney General’s office, said in a press conference he held in the Libyan capital Tripoli that authorities had arrested a senior ISIS commander who supervised the beheadings.

“He gave details on the incident and indicated their place of burial,” Sour said. “We are seeking with military authorities in the central region to discover where the bodies are, and hopefully we will find them, despite the time that has passed.”

Investigators learned that ISIS had established a “desert army” led by Libyan militant Al-Mahdi Salem Dangou, also
known as Abu Barakat, Sour said. The force includes three brigades operating under Dangou, each with its own commander.

“This army was established after the liberation of the city of Sirte… Now they are in the Libyan desert,” said Sour.

Al-Sour said security forces have also detained militants who were involved in the 2012 attack on the US Embassy in Benghazi, which killed Ambassador Chris Stevens and three other Americans.

“Among them were several Egyptians,” who had been receiving direct orders from al-Qaeda leader Ayman and Zawahiri, he added.

On the fate of missing Tunisian journalists Sufian Shuwarbi and Nathir Gutari, the chief prosecutor said that the two men had been killed by ISIS.