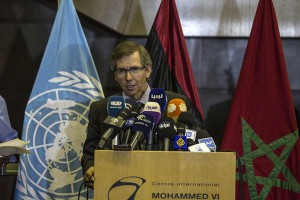 The Libya Dialogue has “finished its work” according to the man chairing it, UN Special Envoy Bernadino Leon. The final text, including all the annexes, apart from Annex No. 1 with the names of the prime minister, two deputy prime ministers and the two other ministers who together constitute the Presidency Council, will be produced in the next few days, he says, and presented to the Dialogue members after Eid. They will then choose the names to go into Annex No. 1 and the entire package will be presented to the House of Representatives and the General National Congress to approve or disapprove.

If they approve, he said, the Dialogue members would go to New York to the UN General Assembly to initial the entire agreement and there the international community would endorse it. Then there would be a second approval ceremony, probably back in the Moroccan resort of Skhirat where most of the negotiations have taken place, and then a final signing somewhere in Libya. This had to be done before 20 October, “the only real deadline we have”, Leon said, referring to the expiry of the House of Representatives’ mandate the following day.

There could be no more changes to the text, he explained It was final. “We will not have any further negotiations.” Now it was up to the two sides to react to the agreement “but not in terms of adding more comments or getting back with something to negotiate”.

Calling on both sides to be “flexible, generous and . . to put the interest of their country above any other consideration” , he admitted that were “many people” who did not like what the Dialogue was doing. But there was no other solution, he said.

Referring clearly to Khalifa Hafter’s widely reported plans for a military council to run Libya (although not mentioning it by name), he dismissed it out of hand. It would not get any recognition or support from the international community and would “just multiply the chaos that Libya is facing”.

Also, in a clear bid to counter resurgent accusations that he is biased in favour of the country’s Islamists following his condemnation on Sunday of Hafter’s new military operation against Islamist forces in Benghazi, Leon also referred to the suffering in the city, this time specifically speaking of attacks by terrorist groups there.

There has been fresh resentment against him and the West following subsequent but unsubstantiated claims by western ambassadors that Hafter had bombed civilians there. There have been anti-Leon and anti-western protests in the city as a result of the allegations.

Although Leon has indicated that the agreement has the support of all the delegates to the Dialogue, it is far from clear that it has the backing of the General National Congress (GNC) or the House of Representatives (HoR). Two GNC delegates, Abdurrahman Sewehli and Mohammad Al-Amari, said yesterday they accepted it, but Ashraf Al-Shah, who this week resigned as political adviser to the GNC delegation, has claimed that the majority of GNC members remain opposed to the Dialogue.

Meanwhile, although some of the HoR boycotters are reported by UNSMIL to have approved the Dialogue draft, only two of the four HoR official delegates were involved in the final negotiations and the HoR is known to be deeply unhappy with the most recent changes. Its approval cannot be taken for granted. Nor are all boycotters backing the Draft.  In a joint statement this week, five of them – Abdurrauf Al-Manaie, Ammar Al-Ablaq, Mohamed Al-Darrat, Hanan Shalluf and Rabia Buras – rejected any political agreement that did not respect the Supreme Court ruling that they claim abolished the HoR.

In a statement of support for Leon, EU foreign policy chief Federica Mogherini has said that the text had to be agreed “as soon as possible”.   The European Union, she stated, was at the Libyans’ side. “We continue to actively support the negotiations and we stand ready to provide immediate support to the new government, notably with a substantial €100-million package to support Libya on its new course.”