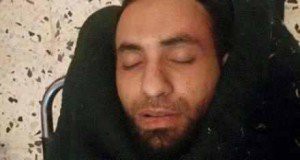 Daesh has published on social media pictures of a captured solider whose throat they say they cut.

The gory images of the butchered man appear to have been taken shortly after Daesh overran  Maydan Al-Shagara in a surprise attack. The victim has yet to be named.

However, in what they say was a successful counterattack today, the army is claiming that a leading Daesh leader has been killed.

Ragab Al-Agouri, also known as Abu Faruq Al-Libi, the Daesh field commander in the Sabri district did in fighting around Suk Al-Hoot.