You are here: Home / Europe / Libya Coastguard battle to save migrants with only one boat 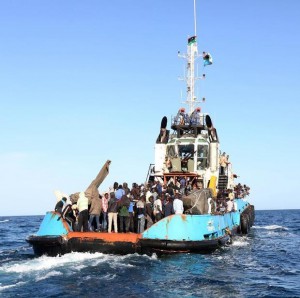 In their struggle to cope with the surge in illegal migrants bound for Europe, the coastguard in the Libyan port of Zuwarah have just one boat, and even that often breaks down.

Situated 60 kilometres (35 miles) from the Tunisian border, Zuwarah also is the Libyan port nearest to European soil — the tiny Italian island of Lampedusa.

“We have only one boat left over from the old regime, which often breaks down, to monitor the entire coastline of Zuwarah,” said Anwar al-Atushi, who heads the area’s coastguard.

“Only 15 coastguards work, with their own means, to rescue migrants at sea and bring them to port before handing them over to the security services,” the official added.

The coastguards’ boat, which can only carry 10 people, is moored in the harbour next to fishing trawlers.

“When the number of migrants is high, we ask permission from the owners of the fishing boats to use them.”

As elsewhere along Libya’s 1,770-kilometre coastline, the flow of illegal migrants from Zuwarah has skyrocketed amid the turmoil in Libya as two rival governments and a mishmash of militias vie for power.

These shores are less than 300 kilometres from Lampedusa, which now shelters thousands of migrants who have fled conflicts in Africa and the Middle East in an attempt to reach Europe.

The government in Tripoli, which is not recognised by the international community, has launched a public relations campaign to show it needs outside help to handle the influx of would-be migrants.

It has taken journalists on tours of detention centres that it says house 7,000 people stopped as they prepared to set sail across the Mediterranean.

The authorities in Tripoli are eager to show they lack the resources to handle the upsurge that the United Nations says saw 110,000 migrants passing through Libyan territory in 2014.

“We use boats and small Zodiacs (inflatable dinghies) to boost our operations against clandestine migration,” said Rida Issa, head of the coastguard service for central Libya.

“But we need another 10 equipped boats” to do the job properly, he added.

Zuwarah is also close to regions that see daily clashes between forces of the recognised government and the Fajr Libya militia alliance that controls Tripoli and most of western Libya.

“Our mission is essentially to protect the city and all security threats,” said Mohamed Salem, a member of Zuwarah’s security forces.

“We have nothing left over for the fight against illegal migration.

“We lack detention centres and the finances… Sometimes we pay from our own pockets to feed the migrants we arrest.”

Salem pointed out that the country has suddenly found itself in the middle of a crisis that Europe itself is unable to resolve.

In Zuwarah, “we only have one car” for patrols and arrest operations, he said.

“Our methods are very primitive and the government is doing nothing.

“We need 4×4 utility vehicles, boats, planes and facilities to accommodate those we arrest,” said Salem.

Among the equipment needed are “weapons to deal with people smugglers, along with communications and night-vision tools”.

The European Union has announced a series of measures, tripling its budget for patrols off Libya and even mooting the idea of military action against smugglers.

But Salem said that “even if all the boats from all the countries in the EU were deployed, they would still fail to stop illegal migration to its shores”. (DigitalJournal)