You are here: Home / Mediterranean / Libya: clashes ongoing in Tripoli between GNC and islamists 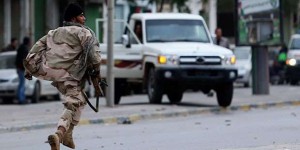 Clashes have erupted in the Libyan capital between militias loyal to a U.N.-backed government and those supporting a rival Islamist-oriented administration that had ruled Tripoli until March this year, Libyan security officials said on Sunday.

The clashes, which began late Saturday and continued into Sunday, followed Friday night’s takeover by militiamen loyal to the Islamist administration of the offices of the U.N.-backed National Accord government. The sites captured included a residential compound for some 145 members of a consultative chamber formally called the Supreme State Council.

The council issued a statement condemning the takeover of its offices, describing the move as “a desperate and bizarre attempt to confuse the political landscape and derail efforts to bring stability to the country.”

In a separate statement, the U.N.-backed government said it had instructed law enforcement authorities to identify and arrest those behind the takeover which, it said, wanted to create “parallel” institutions.

The Islamist General National Congress government has said it intends to seize all other state facilities in Tripoli, including the Central Bank and ministries. It also declared it was now the government in charge, seven months after it stepped aside in favor of the U.N.-backed government.

There was no information immediately available on any casualties from the clashes. The Friday takeover, which came after an hours-long standoff, did not involve any violence, according to the officials, who spoke on condition of anonymity because they were not authorized to brief the media.

Late Saturday, the United States expressed its concern about what it called “reports of violence” in Tripoli and called on all parties to work together for a “safe, prosperous and free Libya.”

The takeover adds a new layer to the chaos and violence prevailing in Libya since the 2011 ouster and death of dictator Moammar Gadhafi in a popular uprising that morphed into a civil war.

Libya has had two parliaments and two rival governments, effectively dividing the country into eastern and western sections. The parliament and interim government in the east of the country are refusing to endorse the U.N.-backed administration in Tripoli, in the west.