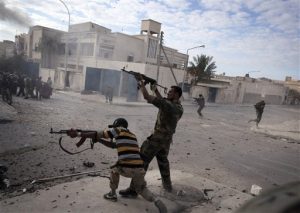 At least two people were killed and three others were injured as clashes erupted in Zliten city, which lies some 140 km away from Tripoli, like reported by libyaobserver.ly.

The clashes broke out between the forces of the Joint Security Operation Room, which was formed recently, and an armed group from Misrata city.

“Two of the joint room fighters were killed in the clashes.” Sources reported, without any further details about the casualties of the other clashing side, whose forces belong to no official, governmental military body, the sources added.

They added that an uneasy calm has descended on the city after the clashes took a short halt when the armed group from Misrata withdrew to Nayema district in eastern Zliten.

In the meantime, the Zliten joint room’s fighters were reportedly mobilizing forces to carry a counterattack on the armed group, which attacked its HQ this morning, the sources indicated.

“Elders from both Zliten and Misrata urged both clashing groups to have some restraint until the reasons of the surprise attacks, which closed the coastal road, are identified.

The Joint Security Operations Room was formed by Zliten municipality in a bid to crack down on the crimes that have grown larger in the city.