You are here: Home / Mediterranean / Libya: clashes break in Derna between Shura Council and Haftar’s forces 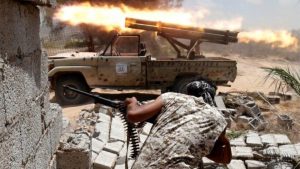 Meanwhile, the Omar Mukhtar Operations Room said the attack took them by surprise and continued until Thursday morning.

Derna has been encrilcled by Haftar’s forces for about two years with intermittent artillery and air attacks every now and then.