You are here: Home / Mediterranean / Libya: clashes between Ajilat and Sabratha 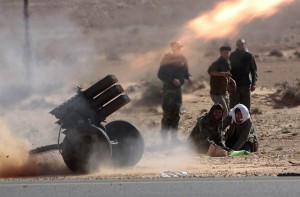 Libya Dawn and Libyan National Army (LNA) fighters traded missile fire yesterday after the latter tried to take control of a remaining part of Ajilat district known as the Suq and which is still controlled by the former.

After LNA support forces – mainly Warshafani and Zintani fighters –launched the bid, Dawn fighters based in Sabratha, less than ten kilometres away, started firing grad missiles, according to a LNA source. A child whose family had been evacuated from elsewhere is said to have been killed and members of another family injured when missiles hit their homes.

After they had pulled out, the LNA support forces then started targeting Sabratha with missiles, causing damage on a local resident’s house, but no known casualties.

Last night, according to the source, the LNA reinforced its positions in Ajilat, expecting a counter attack from Libya Dawn. This, however, did not occur.