You are here: Home / Mediterranean / Libya: children mercenaries dispatched from Syria by pro-Turkish factions and GNA 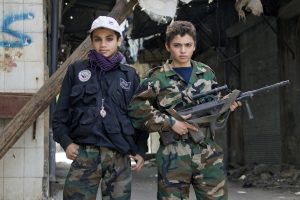 Minors in Syria are being recruited by pro-Turkish formations to fight in Libya for the Government of National Accord (GNA), recent reports said according to syriahr.com.

Turkish-backed militants and mercenaries are fighting in the ranks of forces loyal to Fayez al-Sarraj, head of the GNA’s presidential council, that are battling Libyan National Army (LNA) troops led by Field-Marshal Khalifa Haftar.

According to to the Syrian Observatory for Human Rights (SOHR), “some 150 children have been recruited to fight in Libya” after being offered material incentives “exploiting their poor living conditions.”

Most of the minors hail from Idlib and the north Aleppo countryside and are recruited by Turkish-backed factions in Afrin, especially the “Sultan Murad” Division.

SOHR tells of tragic stories of children reported missing for weeks before their family discover their presence in Libya on videos online. Some of the families have sought information or compensation with Turkish-backed militias in Syria but to no avail.

According to the watch group affiliated with Syria’s opposition, the number of mercenary recruits in Libya arriving from Syria has reached 8,700, including a number of non-Syrians.

An additional 3,550 are being trained in Turkey before they are to be sent to the North African nation.

Eight pro-Turkish mercenaries have recently been killed, bringing the number of mercenaries killed in Libya to 287, said SOHR.

They are said to have been killed in clashes in areas including Salah al-Din district south of Tripoli, al-Ramlah near Tripoli Airport, al-Hadabah Project area and Misrata.

The presence of mercenaries from Syria have been confirmed by official Turkish sources and corroborated by many international reports.

Ankara has also sent military personnel to Libya and supplied the GNA with military equipment, including military drones.