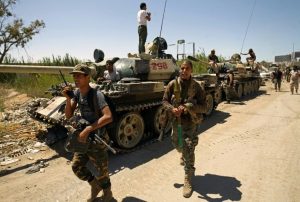 Both the Bunyan Marsous (BM) operations room and the Libyan National Army (LNA) say they are sending reinforcements to the Sirte area after reports of fresh Islamic State (IS) activity there, like reported by libyaherald.com.

IS is believed to be behind the attack on the Fugha checkpoint in Jufra region last week in which nine Libyan National Army soldiers and two civilians were killed. The terrorists have also just released a video showing members stopping and searching vehicles on the road between Abu Grain and the Jufra area.

Also appearing in the propaganda film are Saghayer Majri, the former deputy head of the High National Elections Commision who disappeared last May, and a solider named Mohamed Abu Bakr Mohamed, said to have been arrested at one of the IS checkpoints in Jufra.

No numbers have been put on the forces being sent to the area by both sides although LNA spokesman Ahmed Mismari that those from the east were “massive”. They were being deployed some distance south of Sirte in the Jufra area.

Mismari added that he thought that the IS objective was the oil terminals at Ras Lanuf and Sidra.

Being equally limited in what it was prepared to divuge, the BM said that the forces it was sending were all from Misrata.

There are suggestions, however, that the BM mobilization is as much about concerns that the LNA could move into Sirte as it is about any fresh threat from IS.