You are here: Home / Mediterranean / Libya between war and peace 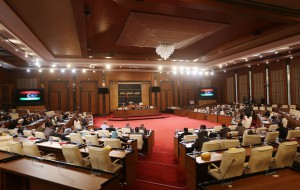 As ever, Libya and its capital are walking on the precipice between war and (relative) peace. Different tracks of negotiations, which seemed all but dead when UN Special Envoy Bernardino Leon stepped down amid an email scandal, have since accelerated in different directions. Alongside the UN track, other “agreements” between groups of MPs from the country’s two parliaments have been announced and on Tuesday the Speakers of the two parliaments met in Malta to ask for more time to reach an agreement. While many people think that the UN process was rushed, there is an equally legitimate doubt that the alternative tracks were just holding games to procrastinate the status quo and the de facto partition of Libya.

The UN dialogue, now under the stewardship of veteran German and UN diplomat Martin Kobler, has significantly accelerated in recent weeks. Kobler used different negotiating techniques from Leon, gathering all delegations together in the same room so that misunderstandings or backtracking were less likely. He appointed an Italian general, Paolo Serra, to conduct negotiations on security and particularly on security in the capital. This track had been moving extremely slowly under Leon.

Finally, the UN process was officially endorsed by a group of 17 nations in a conference in Rome last Sunday that gathered the 5 permanent members of the UN Security Council, large EU members and all regional players including those who have interfered in the Libyan conflict. The final communiqué notably said that the 17 countries would only recognize the government resulting from the UN process and cease relations with other authorities. This further strengthened the message that this process is the only game in town, as far as the international community is concerned.

Nonetheless, it is unclear whether the deal to be signed on Thursday in Morocco will lead to peace and an efficient Libyan government or rather create more conflict and divisions. This depends on three open questions which will have to be answered in the coming weeks.

First, the signature ceremony in the Moroccan city of Skhirat will not just be about numbers but also quality of the signatories: it will have to be clear that the MPs that are signing represent the majority of both the House of Representatives in Tobruk and the General National Congress in Tripoli. The signature of mayors and tribal leaders will be crucial in lending legitimacy to the agreement.

Legitimacy is the most precious currency nowadays in Libya as it affects the second element of uncertainty about the UN deal, namely the security arrangements that would allow the government of Fayez Serraj to operate from Tripoli. This implies negotiations with the armed groups that control the capital which have been conducted by General Serra and whose outcome is unclear. However, the more legitimacy the UN-led political agreement has in terms of support from MPs but also from local leaders, the harder for hardliners to spoil it – and vice versa, an agreement with little legitimacy would be easily challenged by armed groups.

The third open question is what the regional Sunni powers will do. In Rome on Sunday, they have committed to support the government coming out of the UN process but this commitment could be revised if either the government proves too weak or if it bumps against the mother of all issues: what to do with General Khalifa Heftar and how to handle the appointment of the new military leadership. It’ll be hard to square the circle by showing to some Libyans that the new commanders are a new page from Heftar while guaranteeing Egypt’s interests and concerns.

The first two questions are more likely to have an immediate impact on the success of the Serraj government and of the UN deal in general as the GNC and its speaker Nuri Abu Sahmein are unlikely to dislodge voluntarily and let it work freely in Tripoli. The third question will affect the sense of urgency of all actors involved, as the Sunni powers won’t give much time to Serraj to prove that he’s effective.

It’s time to get out of the fiction of the “international community” on Libya: Sunni powers don’t share the Western agenda of de-escalation in Libya, nor did they show to prioritize anywhere in the region the fight against Daesh over the intra-Sunni clash or armed containment of Iran.

To this end, the Rome conference was the beginning of an international support group to the Libyan peace process which could be helpful, provided American and Europeans manage to stop any initiative from regional powers that might escalate the conflict.

Unfortunately, the US and the Europeans have fallen into a number of illusions that have led to rush the signature of the UN agreement before a powerful Libyan coalition could be built behind it. The West has been convinced for a very long time that the Government of National Accord (GNA) would be a response to the expansion of IS and the more this threat grew, the greater urgency in having anything that could be packaged as a GNA. In this context, any positive sign in favour of the agreement was over-estimated and this lead to the assessment that there was a majority in both parliaments in favour of the agreement and by going around the two Speakers while adding some international pressure, the deal would come together.

Instead, now the risk is to have two alternative Libyan governments both claiming to be the result of a reconciliation and both wanting to operate from the Capital: along with the Serraj government, an alternative cabinet resulting from the meeting in Malta between the two Speakers. That would be a recipe for armed confrontation in the capital, where the violence has been relatively low in the past months if compared to the summer of 2014.

Martin Kobler and the West can do a few things to fix what has been a rushed process in the last weeks. First, they need to strengthen the domestic legitimacy of the agreement. Those signing in Skhirat should become part of a permanent “Libyan shura” for political dialogue, which would include pro-agreement MPs as well as mayors and other local leaders.
This would serve as a “buffer” for adjustments to the political dialogue and also to fill the voids left by an agreement which is predicated on the correct functioning of both the House of Representatives and the new State Council stemming from the GNC. In fact, the two existing parliaments have barely convened recently and the two speakers have shown no willingness to make them function.

Secondly, the positions yet to be filled in the Presidential council and the other government positions can be used to gain buy-in into the agreement from key actors and this can be played into the security track. Third, a parallel track on the economic governance must be established to make sure that the parties stop their warfare over the economic institutions and the fiscal and humanitarian crises are addressed.

Finally, the GNA should not be seen as a body that will rubber-stamp ill-advised Western air strikes against IS in Sirte or, even worse, a body that will be ignored as if the fight against Daesh had nothing to do with strengthening the political process. The new “Libyan shura” should instead be mobilized to create the political consensus to coordinate Libyan efforts to liberate Sirte and the rest of central Libya from what are in effect foreign occupiers.