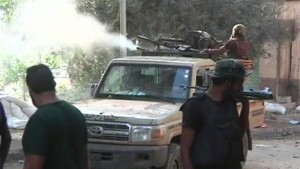 There have again been heavy clashes in Benghazi during the past two days particularly in the downtown area, in Suq Al-Hout and neighbouring Sabri, where there has been direct fighting. In Hawari and other affected districts, the clashes have been more a case random but nevertheless deadly missile fire.

At least 12 people were reported died today – four soldiers killed in action, although the Libya National Army (LNA) has not said where, and eight as a result of random rocket attacks. Mostly civilians, the latter were killed in and around Buhdeima and include four brothers, in their 20s, named as Tariq, Salah, Mansour and Hamza Ramadan Al-Arafee, from the city’s Hay Al-Zawia (previously known as Hay Al-Fatah).

The others have been named as Walid Ibrahim, Khaled al-Fakhri (an off-duty member of Saiqa forces), Zaki Al-Barani and Awad Ibrahim Al-Awkali.

Random rockets have also landed in Salmani, Ard Zuwawa, Fuwayhat and Hadaiq. They are believed to have been fired mainly from Hawari. Very early this morning a rocket landed near the Children’s Hospital, opposite the Benghazi Medical Cenntre.

It was reported that three residents – two young women and an older man – had been killed in Beirut Street in central Benghazi as a result of random shelling and 20 ther injured. Jalaa Hospital has denied their deaths saying the three were injured.