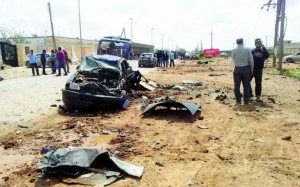 A car bomb exploded at a checkpoint south of Benghazi, killing at least three Libyan National Army (LNA) soldiers. The attack, at Tika, a small village on the road to Gemenis and Ajdabiya, is being blamed on the Benghazi Revolutionaries’ Shoura Council.

It is not thought to be a suicide bomb. However, how the vehicle arrived at the checkpoint and what happened to the driver are unknown at present.

The bodies of the dead soldiers are reported to have been taken to the hospital in Ajdabiya.