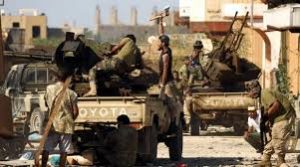 The Libyan National Army, commanded by Khalifa Haftar, announced on Monday that its campaign against the last remaining terrorist pockets in the eastern city of Derna is nearing its final stages, like reported by aawsat.com.

“The LNA controls most of the city, but there are still pockets of resistance,” LNA spokesman General Ahmed al-Mismari told AFP.

The spokesman called on displaced families to return to their homes in “liberated areas” of the city.

The LNA launched a ground offensive to take Derna last month after encircling the city – the last in eastern Libya to elude their control – for around two years.

The LNA is fighting a coalition known as the Derna Protection Force (DPF), which includes local combatants and extremist forces with links to groups in western Libya. The DPF includes fighters with connections to al-Qaeda, as well as foreign militants.

On Saturday and Sunday, the LNA said it had advanced in the district of Sheiha after hitting it with multiple air strikes, to the edge of Al Maghar in central Derna, a Mediterranean port.

“What remains outside the control of our forces is considered a small combat zone, less than just 10 km squared,” said Mismari. “The operations are in their final stages and the fighting is very heavy.”

On June 4, Haftar said “victory was near” for his forces in Derna.

He said the LNA would deploy across the city to take control of all areas and infrastructure, warning his troops against taking “revenge” — in particular against terrorists who surrender and give up their arms.

The United Nations has expressed concern about the plight of Derna’s 125,000 residents, whose access to food, water, communications and medical treatment has been severely restricted.

The LNA has said it is working to restore services and deliver food to parts of Derna where it has advanced.

The Libyan Red Crescent said it had helped some 1,800 families that had been granted safe passage from areas being fought over. It said Sunday it had delivered humanitarian aid to 6,000 people in western Derna’s Bab Tobruk district, in addition to thousands of others who have fled fighting in the embattled city to nearby areas.