You are here: Home / Mediterranean / Libya: at least six die in fighting near Benghazi between forces from Libya’s recognised government and Islamist militants 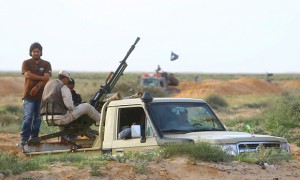 Heavy fighting erupted over the weekend between forces from Libya’s recognised government and Islamist militants west of Benghazi, killing at least six people and heightening tensions in UN peace negotiations.

Benghazi is just one front in a wider conflict in Libya, where a battle between two rival governments and their armed allies is pushing the north African state to economic collapse, four years after the fall of Muammar Gaddafi.

At least six people were killed and ten wounded when fighting broke out on Saturday west of Benghazi between General Khalifa Haftar’s Libyan National Army forces and fighters allied to Islamic State, a medical source and local residents said.

The fighting between General Khalifa Haftar’s Libyan National Army forces and fighters who are allied to Islamic State broke out on Saturday and involved artillery shelling and airstrikes, according to a medical source and local people.

Mohamed Hejazi, a spokesman for Haftar’s forces, said they had launched a campaign against positions in Benghazi, which has been caught up in fighting for more than year.

Western governments see the best solution in a United Nations-backed peace deal to bring the two sides together in a united power-sharing agreement. But fighting and pressure from hardliners on both sides have complicated negotiations.

The United Nations and US and European envoys criticised the increase in hostilities just before the Muslim holiday of Eid al-Adha, and urged the two factions to finish the UN-backed deal. UN envoy Bernardino Leon had originally set yesterday as a deadline for negotiations to conclude.

“This escalation of violence underscores the urgent need to complete the political dialogue process as soon as possible,” a US-EU joint statement said.

Four years after their uprising toppled Gaddafi, two loose factions of former rebels and their political allies who once fought together have turned against each other in a battle for control of the Opec state.

Tripoli was taken over a year ago by Libya Dawn, an alliance of Islamist-leaning brigades and former rebels from the powerful city of Misrata who set up a self-declared government in the capital and reinstated a former parliament known as the General National Congress or GNC.

Since then, Libya’s internationally recognised government and the elected parliament, the House of Representatives, has operated out of the east of the country, backed by Haftar’s forces and a loose alliance of other armed factions.

Islamist militants and migrant smugglers have taken advantage of the turmoil to gain ground even as the United Nations and the European Union warn the country is edging toward becoming a failed state.

UN talks are continuing in the Moroccan city of Skhirat, but both factions from the House of Representatives and the GNC Tripoli parliament warned of growing tensions after the increase in Benghazi fighting.

“Our team in Skhirat is studying suspending our participation in the peace talks because of the military escalation in Benghazi,” Abdulrahman Swahili, a GNC parliament member told Nabaa TV.