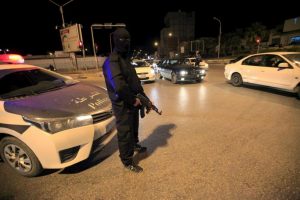 Two members of the Islamic State (IS) who planned to carry out a car bomb attack in the Libyan capital of Tripoli were arrested, China’s Xinhua news agency reported the state’s Ministry of Interior as saying.

“After tracking and monitoring of the movements of (the) suspects, two persons were arrested and confessed that they belong to IS,” the Joint Deterrence and Interference Force, a security force of the ministry, said on social media platform Facebook.

Footage posted on Facebook by the force showed the two IS members’ confession of plotting a car bomb attack in the city. They placed a bomb near the industrial district of central Tripoli, but failed to detonate it twice before they were arrested.

The terrorists, who fled from the northern city of Benghazi, also admitted their previous plots to bomb security and military sites in Al-Drebi area of Tripoli, but failed more than once due to a technical fault.

Just on Saturday, the security force successfully dismantled an explosive device in a market in Al-Drebi area after receiving a report.

Despite IS defeat in northern cities of Benghazi and Sirte, the fleeing terrorists continue to carry out car bombs and suicide attacks in the North African nation, most notably the attack in October last year on a court complex in Misurata city, some 190 kilometers east of Tripoli, which killed three security personnel.

Libya has been suffering insecurity and chaos since the fall of former leader Muammar Gaddafi’s regime in 2011, and is now plagued with political division and escalating violence.