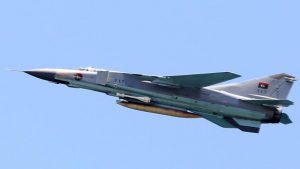 The Libyan eastern-based army said that fighter jets have launched airstrikes on Chadian armed groups in southern Libya after the army’s deadline for African migrants to leave the south.

“After the deadline, the operations began to secure southern Libya based on the mandate of the General Command. Air force began today to comprehensively enforce law and respond to terrorism and criminal operations and armed gangs, by carrying out the first combat airstrike targeting 10 vehicles south of Harug Mountains,” the army said in a statement.

The army also confirmed that airstrikes were carried out on Sunday targeting vehicles of Chadian opposition in Libya.

On March 9, the army set March 17 deadline for nationals from neighboring African countries to leave southern Libya in order to curb the erupting violence there, warning they would be removed by force.

The army also called on tribal elders and leaders in southern Libya to stop social support for all those who “help in any way protect or house African nationals, leading to destabilization of southern Libya.”

The city of Sabha, located some 800 km southwest of capital Tripoli, has recently been witnessing violent clashes between rival tribes that killed and injured dozens of civilians and forced hundreds of families to flee their homes.

People from Chad, Niger and Sudan have been accused of involvement in the conflicts in Sabha. Hamed Al-Khiali, head of the municipal council of Sabha, said last month that the local airport was occupied by “an armed group that has nothing to do with Libya,” carrying flags of other African countries.

Recently in Tripoli, the UN-backed government announced measures to support its forces in Sabha to fight the so-called “mercenaries.”