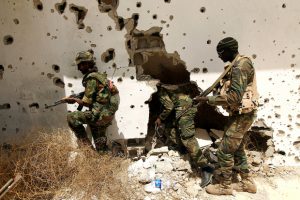 According to the eastern-based Libyan news agency, the army’s oil fields security operation chamber revealed it was surrounding an IS group who attacked an oil field near Jufra, some 650 km southeast of the capital Tripoli.

The operation chamber announced state of alert after receiving information about a mobilization of IS militants in an area far from the oil fields.

Jufra district is located in central Libya and consists of five small towns. It also contains Zalla basin, an important area with a number of major oil fields.

IS affiliates are mostly active in the areas surrounding Jufra all the way to southern Libya due to the nature of rugged desert.

In the past few years, IS terrorists have launched a number of attacks on oil fields in Zalla basin.