You are here: Home / Mediterranean / Libya: are there any Russian mercenaries to support Haftar’s army? 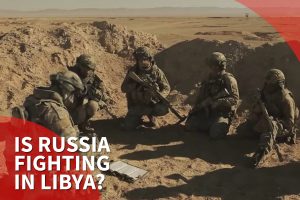 The conference on the settlement of the Libyan conflict is considered successful in Russia. But what about Russian mercenaries? Every now and then it comes to the fact that they are participating in the civil war in Libya. Let’s consider a question in more detail, like reported by bulgarianmilitary.com.

Turkish President Recep Tayyip Erdogan recently spoke of about 2,000 Russian mercenaries involved in the army of General Khalifa Haftar. According to representatives of an internationally recognized government led by Prime Minister Faiz al-Sarraj, there are 600-800 Russian fighters from the so-called Wagner group in Libya.

The Russian leadership, for its part, denies the participation of Russian mercenaries in the Libyan war. And not without reason – Russian law prohibits private armies. Mercenary is punishable by long terms of imprisonment. Therefore, there is nothing surprising in the statement recently made by Vladimir Putin in the presence of Chancellor Angela Merkel: “If there are Russian citizens there, they do not represent the interests of the Russian state and do not receive money from the Russian state.”

From minerals to military training

But all this does not mean that fighters of the Wagner group cannot be in Libya, Russian experts say. After all, “Wagner” is considered a private military company acting at its own peril and risk, and also, on which they like to focus, in their own interests.

Apparently, she has wide interests: it is about access to mineral resources, then about protecting strategically important infrastructure, then about training and education of military and militants.

Carefully correlated facts gathered by Russian investigative journalists indicate that Wagner’s units are also actively involved in hostilities. Especially where the presence of regular Russian troops would be dangerous from the point of view of security policy or would be regarded ambiguously at the international level.

It is interesting that in such cases, fighters can use heavy weapons, journalist Denis Korotkov explains in a telephone interview: “If necessary, they receive artillery weapons, tanks, rocket-propelled grenade launchers, unmanned aerial vehicles and mortars.”

Korotkov and his colleague Ruslan Leviev, head of the Conflict Intelligence Team investigation team, have no doubt that the Wagner group was involved in eastern Ukraine and Syria: “But in the case of Libya, everything is still not clear. Many say that these people are present there, but we have not yet seen unambiguous photo and video evidence. ”

Meanwhile, there were reports of fighters who died fighting on the side of Haftar. News portal “Medusa” names the figure of up to 35 Russian citizens.

The videos also show that entrepreneur Yevgeny Prigozhin, known as the “Putin cook”, who allegedly finances the Wagner group, attended a meeting between Haftar and Russian Defense Minister Sergei Shoigu in Moscow a year ago.

Prigogine denies any involvement in Wagner. According to the official version, he was responsible for catering at the event. Many wondered what kind of soup this is preparing the Russian government.

As far as one can judge, oil, strategic points, and also influence in the region matter. That is, a lot of what constitutes the interests of Wagner, as well as the interests of the Russian leadership, which from now on intends to do everything in order to maintain a truce in Libya.