You are here: Home / Mediterranean / Libya appeals to world powers to unite in fight against ISIL 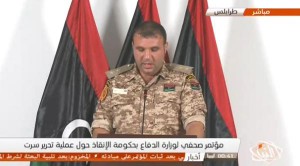 While Libyan troops clash with ISIL militants in attempts to take control of the city of Sirte in the south of Libya, state authorities are urging world powers to unite in the battle against the jihadist group and carry out airstrikes on its positions across the country.

The legitimate authorities of the Libyan state called on the leaders of the world community to carry out airstrikes against ISIL targets on the territory of the country, particularly the hometown of the country’s former leader Moamer Kadhafi, Skynews Arabia reported quoting a cabinet statement on Saturday.According to the government spokesperson Hatem al-Ureibi, officials have filed a series of requests to the members of the world community and to the leaders of the League of Arab States asking for military assistance in order to regain Sirte from ISIL militants.

Hatem al-Ureibi also expressed concerns over possible prolongation of ISIL occupation of the city that could pose threat to the security of the entire Mediterranean region.

So far, during the occupation of Sirte, ISIL militants have committed a row of atrocities. In particular, jihadists beheaded twelve armed people and hanged their bodies on the crosses of the city, according to state news agency LANA. Another 22 residents were killed for resistance right in the hospital, as they were lying wounded in the wards. Militants afterward burnt the medical establishment down.

The number of casualties in Sirte increases constantly – by the end of Friday clashes left between 150 and 200 citizen dead, according to AFP.

“A real massacre is taking place, and we call on the international community to intervene,” Libya’s ambassador to France said to AFP.