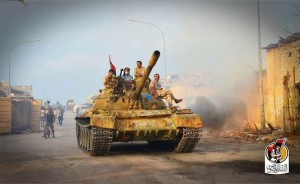 A military source said to libyaprospect.com that the commanders of the three battling axes in the city of Sirte convened in Misrata and decided to keep the battalions of the eastern axis to secure the city.

They decided to send the battalions of the southern axis to the city of Sabha to support the Third Force that secures the southern Libya.

The source added that the commanders agreed to send western axis battalions to Tripoli and secure it. They cooperated with Operations Chamber of Al-Bunyan Al-Marsous called up the air forces to attack any suspicious movements or moving military convoys without prior coordination with the commander of the military region.