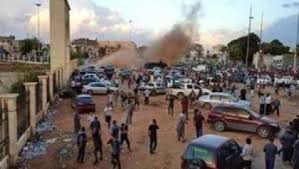 Following Friday’s deadly attack on demonstrators in Benghazi’s Kish Square, the Libyan air force again continued intensive although intermittent air strikes todayagainst militant Islamist positions across the city. They were met by randomly targeted shelling by Ansar Al-Sharia and Islamic State (IS) forces, which landed throughout the city.

The air strikes were on Laithi, Sabri, Hawari, Fuwayhat, Suq Al-Hout, Beloun and Garyunis, the last two of which have, on more than one occasion, been declared liberated by the Libyan National Army and under its control.

However, they still house militants.

Air force commander Major General Saqr Geroushi said that seven jets were involved in the air raids which hit an arms depot in Hawari as well as a ship coming from Misrata attesting to bring supplies to Ansar and it allies. An arms store in Garounis had also been discovered and destroyed.

“Random rockets are the biggest problem,” on Benghazi resident, Salma, said. “As soon as the bombing raids start, Ansar starts firing missiles in all directions. It is very dangerous. Everything is otherwise usual. People go shopping. We now live with it. But we’re afraid of the missiles.”