You are here: Home / Mediterranean / Libya: after Jordan, Haftar talks with UAE about military support 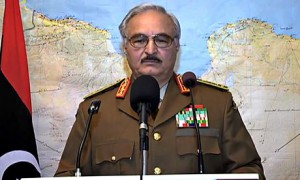 General Khalifa Haftar, the head of Libya’s armed forces, is in Abu Dhabi for talks on military support from the Emiratis. The UAE has been a major ally of the House of Representatives and the Thinni government in their struggle against Libya Dawn in the west of the country and Ansar Al-Sharia and the Islamic State in the east, and has provided both military and humanitarian aid.

Haftar’s visit follows on the heels of that made to Jordan, where again the main subject was Jordanian help in building up Libyan military capacity.

In Abu Dhabi today, Hafter met with Sheikh Mansour bin Zayed Al-Nahyan, the UAE’s Deputy Prime Minister and Minister of Presidential Affairs. According to the UAE new agency WAM, talks focused on ways of ensuring stability in Libya and how the UAE could help achieve that goal.

Meanwhile, in Tobruk, members of the House of Representatives say they want to question the head of the armed forces about military developments in the country in the wake of last week’s abortive uprising in Tajoura. They also want to interview the Chief of Staff, Major-General Abdurazzaq Al-Nazhuri.  He was today attending a meeting of Arab Cheifs-of-Staff in Cairo.