You are here: Home / Mediterranean / Libya: a place where terrorists terrorize other terrorists… 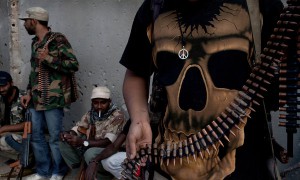 ISIL (Islamic State in Iraq and the Levant) is having an easier time grabbing headlines than holding ground in Libya. The latest example of this is in the coastal city of Sirte (500 kilometers east of Tripoli and 560 kilometers west of Benghazi). In July Islamic terrorist groups affiliated with ISIL claimed to have control of this city. That proved to be overly optimistic. Sirte had a population of 100,000 in 2011 and was former dictator Kaddafi’s birthplace. Before 2011 it was full of his well-cared for Kaddafi supporters. Sirte was heavily damaged, and looted, during the 2011 rebellion. Most of the population fled the fighting and when they returned they found a much less prosperous lifestyle.

This caused some of the locals to arm themselves and misbehave. The continued anarchy in Sirte made it possible for many Islamic terrorist groups to establish themselves there. Kaddafi was a religious man as were many of his followers and some of those now became fans of Islamic terrorism. Until 2014 there was nothing to unify the many factions in Sirte. Then ISIL came along and some Sirte based Islamic terrorist militias have pledged allegiance to ISIL. Soon after that ISIL began enforcing their strict lifestyle rules (including how women are to dress and act) there and public punishment (including execution) for those who refuse to comply. This soon backfired and so far in August ISIL is on the defensive in Sirte as the majority of armed factions there fight back.

ISIL also claims control of Sabratha, which is 66 kilometers west of Tripoli and about the same size as Sirte. In fact ISIL controls parts of Sabratha and the reality is that no one has controlled all of Sabratha since 2011. Further east Derna (200 kilometers east of Benghazi) came under the control of ISIL affiliate Islamic terrorists in late 2014 but has since become a patchwork of pro and anti ISIL factions.  Derna is a little larger than Sirte and has long been a commercial center. Al Qaeda affiliated Islamic terrorists drove ISIL out of central Derna in June but ISIL managed to maintain positions on the outskirts. ISIL admits they were defeated in Derna but insist they will take it back.

In the last few weeks that effort has largely consisted of machine-gun and mortar fire and a few suicide bombings. But the people on the receiving end are also Islamic terrorists and not particularly intimidated by ISIL threats or tactics. Fighting also continues in the eastern city of Benghazi and Brega (an oil export terminal in eastern Libya). In both cases small groups of Islamic terrorists continue to cause problems, even though the Islamic terrorists have lost control of most of the territory they held in the east as recently as 2014.

Despite cooperation between the Tripoli and Tobruk governments oil production has continued to decline this year, going from 600,000 barrels a day (a third of this is equivalent amounts of natural gas) in March to under 400,000 barrels in August. Violence near oil facilities caused production to drop from 800,000 barrels a day in early December 2014 to about 250,000 in early February. This decline in exports has not had any noticeable impact world oil prices, which continue to slide. Production increased momentarily in March but continued violence and electricity shortages caused further declines. The electricity shortages are becoming a major economic problem countrywide. Arrangements have been made to import 250 MW of electricity from Tunisia and 75 MW from Egypt. More high-capacity diesel generators are being imported and factories are actually helping by shutting down (because they could not get enough power to keep operating).

Libya is still exporting Islamic terrorists. In Egypt (northern Sinai) the security forces have managed to keep the Islamic terrorist violence down in the last month. This was all the result of a massive and violent government response to a series of attacks on checkpoints in Sinai on the July 1st. ISIL took credit and Egypt has been retaliating ever since. Egypt said this was an attempt by ISIL to take control of Sinai and that this never came close to success. Egypt also revealed that some of the ISIL men in Sinai had recently come from Libya seeking an area with fewer problems. While many of the Islamic terrorists in Sinai have switched allegiance to ISIL, most of the smaller number operating outside Sinai have not. ISIL is desperate to do something spectacular to increase their media visibility and popularity among pro-Islamic terror Egyptians. The Egyptian government is trying to prevent that.

August 13, 2015: Two days of UN hosted peace talks in Switzerland ended with both the Tobruk and Tripoli governments agreeing that a peace deal was the only solution and that one was within reach. The talks will resume in September after both sides have had a chance to get their factions to agree on terms. Everyone expects a final deal by September. Aside from getting all the factions involved to agree there is also the situation with the Tripoli coalition, which is falling apart and often unable to agree to any peace deal because of that. That is becoming secondary to starvation. Growing economic (less oil income and imported food) and military (ISIL and warlords) pressure has led the troublesome factions of the Tripoli government to be more accommodating.

Beyond peace there are other problems, like many Libyans blaming outsiders (the West, mainly) for all their problems and refusing to take responsibility for the mess Libyans have created for themselves. At the UN there are problems with China and Russia. These two countries are also at odds with the West and do all they can at the UN to prevent peace in Libya. Russia in particular wants the Western nations that are most hurt by the continuing chaos in Libya and flood of illegal migrants to keep suffering. This is right out of the Russian Cold War playbook and is discussed freely and proudly on the streets of Moscow. That Chinese also recognize the usefulness of this tactic but are also eager to invest in the rebuilding of Libya.

August 8, 2015: In the west, on the Tunisian side of the border police arrested twelve Tunisians who were using a people smuggler to get into Libya so they could join one of the many Islamic terrorist groups there. Tunisia has been very successful in dealing with the Libyan based Islamic terrorists, aided by tighter border controls and increased help from a population that has become very hostile to Islamic terrorism.

August 7, 2015: Libyan violence shows up far to the south. In central Mali, some 600 kilometers northeast of the capital Islamic terrorists attacked the Byblos Hotel, an upscale place popular with foreigners. In the end nine civilians, including five UN employees were killed along with four soldiers and four attackers. Al Mourabitoun, an Islamic terror group based in southern Libya claimed credit for the attack. This group is known to be operating in Libya and constantly watched and attacked by American counter-terror forces. This effort has had mixed results. Thus on June 17th Al Qaeda announced that their second-in-command in Libya, Mokhtar Belmokhtar, was not killed by a recent American air strike. Mokhtar Belmokhtar (the planner of the January 2013 natural gas facility attack in southern Algeria that got 37 workers killed) has survived several attempts to kill him and has a reputation for being elusive. He survived such attacks in 2013 and 2014.

For over two years al Mourabitoun has been using bases in southern Libya and has been seen operating in northern Mali and Niger. The U.S. is offering a $5 million reward for information that would lead to the death or capture of Belmokhtar. Al Qaeda admitted the deaths of seven Islamic terrorists during the American attack in June and named the victims. In Libya anti-Islamic terrorists groups cooperated with Americans to confirm if Belmokhtar was alive or dead and that effort has so far not come up with any proof. Belmokhtar has not been seen alive since June and the August 7 attack in Mali was claimed by his organization, not by Belmokhtar himself. Al Mourabitoun continues to survive in Libya because of the chaos there.

August 6, 2015: In the west (outside Misrata) the body of a judge kidnapped by ISIL in July was found. The man had been shot dead after being tortured. The judge was taken when he stopped on the coast road to deal with an ISIL roadblock. This sort of random violence is becoming more common and persuading more Libyans to support a peace deal.