You are here: Home / Mediterranean / Libya: 8 killed, injured in clashes in Sabratha 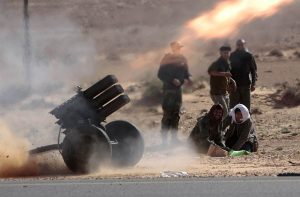 Three people were killed and five wounded in a surprise attack launched by militants on Sunday in the Libyan city of Sabratha, like reported by aawsat.com.

The al-Wadi brigade said that three militants wee killed and five others wounded in the assault.

Efforts are underway to restore calm in the area.

The brigade said that it has seized the weapons in the militants’ possession, posting photographs on its official Facebook page of how it restored its control over the city.

A military commander in Sabratha in charge of operations against ISIS denied that members of his unit were among the victims of the clashes.

The situation in the city is under control after the gunmen’s advance was thwarted, said Omar Abduljaleel.

The Sabratha security agency said that life had gone back to normal in the city, releasing photos of security deployments there.

It blamed the attack on a “sleeper cell affiliated with fugitive groups that are seeking to destabilize the city.”

Members of the cell have been detained, it stressed.