You are here: Home / Mediterranean / Libya: 7 die in Islamic State attack near Misrata 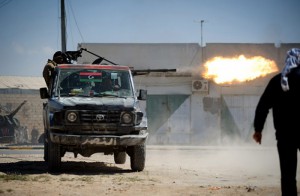 Militants with the Islamic State group killed seven fighters with the rival Libya Dawn militia in an attack on a checkpoint near the city of Misrata, a militia spokesman said Thursday, like reported by ArabNews.
Wednesday’s “attack on the checkpoint killed seven from Libya Shield Force south of the city,” the spokesman said, referring to a part of the Libya Dawn alliance.
IS said in an audio recording posted online that it was behind the attack on the checkpoint, about 200 kilometers (125 miles) east of capital Tripoli.
Last week, five Libya Dawn fighters were killed when IS attacked a checkpoint in the Libyan city of Sirte.

Fourteen Egyptian fishermen held for entering Libyan waters without permission were meanwhile released Thursday after three months in detention. A Libyan maritime official said the release came after coordinating with their families and Egyptian authorities.
Libya has been plagued by chaos since the end of the revolt that toppled Qaddafi, with heavily armed militias battling for control of its cities and oil wealth and rival governments and parliaments vying for power.