You are here: Home / Mediterranean / Libya: 5 killed in clashes between rival militias in Tripoli 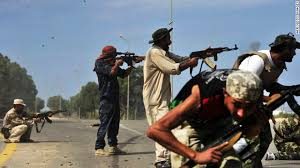 The majority of these militias support the internationally-recognized GNA.

The GNA’s chief of staff later denied its affiliation to the 7th Brigade, a militia from the town of Tarhuna southeast of Tripoli.

Explosions and gunfire echoed across suburbs of the capital as the factions faced off with tanks and pickups mounted with machineguns, residents and security sources said, according to Agence-France Presse.

The fighting broke out early in the day before easing off in the afternoon, although intermittent explosions were heard in the Ain Zara and Salaheddin neighborhoods of southeast Tripoli.

“I’m still hearing very strong blasts that are rattling the windows of my home,” a resident of Ain Zara told AFP by telephone, asking not to be named.

A resident of Salaheddin said tanks and several pickup trucks loaded with heavy machineguns were still deployed on the main roads of the suburb.

“I hear shooting. I can’t leave the house,” he said, adding that apartments had been hit by shelling.

The Tarhuna municipal council said that the 7th Brigade, which is linked to the GNA’s presidential guard, was attacked by “outlawed militias.”

The GNA’s “special deterrent force” accused in a statement Libyan National Army commander Khalifa Haftar of being behind the militia clashes.

It described him as a “war criminal”, who was attempting to destabilize the capital.

It also said that the 7th Brigade was affiliated to Haftar.

For its part, the Brigade said that it repelled, in cooperation with forces in Tarhuna, a surprise attack by the Tripoli Revolutionaries and Nawasi Brigades militias, accusing them of terrorizing civilians.

Meanwhile, the national electricity company said its network had been hit and warned of a possible “total blackout” in Tripoli, where power supplies are already rationed.

The GNA, for its part, ordered its Interior Ministry and security forces to confront the outlawed gangs. The ministry called on all sides to prioritize national interests above their own.

GNA Chief of Staff Abdulrahman al-Tawil urged all sides to exercise restrain and cease tampering with the capital’s security and lives of its people.

Separately, the Italian embassy in Libya denied that the Tripoli clashes forced Ambassador Giuseppe Perrone to flee the capital.

It said in a statement posted on its official Twitter account that he had been abroad on holiday before the fighting erupted, adding that the embassy was still functioning at normal capacity.