You are here: Home / Mediterranean / Libya: 19 militants killed in clashes in Derna 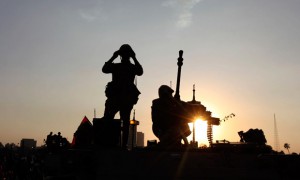 Nineteen militants were killed earlier on Wednesday in clashes between local jihadists and the Islamic State (IS) affiliate in the eastern Libyan city of Derna, according to a security source.

“Three commanders of al-Qaida linking militants of Derna were killed in clashes against IS affiliate. About 16 IS affiliate militants were killed including Libyan leaders and ten foreigners,” a source from the Interior Ministry told Xinhua on condition of anonymity.

“The fighting was caused by different ideology of IS fighters who came back from Syria where they fought with al-Nusra Front,” the source added.

Nasser al-Aker, a senior militant leader in Derna, was also killed on Tuesday by IS fighters, the source said.

Local residents said that the city is currently in chaos where sounds of different weapons can be heard.

Derna is currently controlled by the IS affiliate in Libya. The group recently took over the city of Sirte, some 450 km east the capital Tripoli, after the so-called 166 Battalion militia of Tripoli’s self-declared government evacuated the city.

Libya, an oil-rich north African country, has been suffering a security vacuum since the fall of Muammar Gaddafi’s regime in 2011. Since then, the country has been plagued by rival armed groups continuously fighting for dominance.