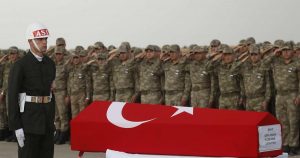 As many as 16 Turkish soldiers have been killed by the Libyan National Army (LNA) led by General Khalifa Haftar, a senior official in the LNA claimed according to middleeastmonitor.com.

The statement by Colonel Khaled Al-Mahjoub, director of the Department of Moral Guidance, comes days after Turkish President Recep Tayyip Erdogan announced that his country’s forces have been fighting alongside the internationally-recognised Libyan Government of National Accord (GNA) against Haftar’s forces.

The Turkish president also acknowledged that a number of Turkish soldiers were killed in Libya.

“We are there [in Libya] with our soldiers and our teams from the Syrian National Army. We continue the struggle there. We have several martyrs. In return, however, we neutralised nearly a hundred [of Haftar’s] legionaries,” he said.