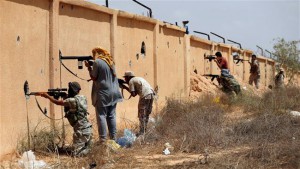 At least 11 soldiers were killed as Libyan government forces pushed deep into the last Daesh stronghold in the northern Sirte city.

Akram Kleo, a spokesman for the Musrata hospital, said 11 corpses were admitted to the hospital on Saturday.  “More than 30 injured soldiers were also rushed to the hospital,” he told Anadolu Agency on Sunday.

According to Kleo, the casualties occured during Saturday’s clashes with Daesh militants in neighbourhood Number Three, the last Daesh stronghold in Sirte. He said most soldiers were killed in car bombings carried out by Daesh militants.

Mohamed al-Ghosri, a spokesman for the government’s ongoing anti-Daesh campaign, said nine soldiers were killed and 15 others injured in two car bombings in Sirte on Saturday. “Daesh has sent in five car-bombs in an attempt to attack our forces, but we have thwarted their attempt,” he said. The spokesman said that between 70-100 Daesh militants are only left in neighborhood Number Three.

For weeks, forces aligned with the UN-backed unity government have been fighting Daesh militants in an effort to recapture Sirte, which was overrun by the terrorist group in 2015. Libya has remained in a state of turmoil since 2011, when a bloody uprising ended with the ouster and death of longtime strongman Muammar Gaddafi. Since then, the country’s stark political divisions have yielded two rival seats of government, one in Tobruk and another in Tripoli. Late last year, Libya’s rival governments signed a UN-backed agreement to establish a unity government in an effort to resolve the country’s ongoing political standoff.