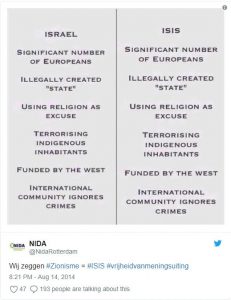 A coalition between left-wing socialists and the Islamic extremist party Nida in the Dutch city of Rotterdam has collapsed after a tweet from Nida which called the state of Israel equal to the Islamic State terror group surfaced, like reported by breitbart.com.

The coalition, which consisted of Nida, the Labour Party, the Greens, and the Social Democrats, was formed to combat the right-wing parties like the Party for Freedom (PVV) led by populist firebrand Geert Wilders in next week’s municipal elections, NL Times reports.

The tweet, which was published in August 2014, shows a picture with two columns, one labelled ‘Israel’ and the other labelled ‘ISIS’. It then goes through a list of statements, including claims that Israel is an “illegally created state” and terrorises indigenous inhabitants.

As a result of the tweet, the left-wing parties decided to drop their cooperation with Nida. Greens Rotterdam leader Judith Bokhove said: “Contrary to what we agreed, Nida does not distance itself sufficiently from the objectionable tweet from 2014. I no longer have confidence in Nida’s position. As far as I am concerned, there is no longer a place for Nida in our alliance.”

Rotterdam Labour Party leader Barbara Kathmann echoed the statement, saying: “It seemed that we would get through it together. But in the end, I found that the cooperation is not there now.”

Nida city councillor Nourdin el Ouali said the group would still work with the Social Democrats and that the party was still keen on the coalition agreement.

The extremist party is not the only party with Islamic overtones. In the Dutch election last year the party Denk, which is largely made up of Turkish Muslims, won several seats in the Dutch parliament. Denk is accused of being a “mouthpiece” for Turkish president Recep Tayyip Erdoğan.

Sweden also saw the rise of an Islamic extremist party named Jasin last year, but the party was eventually shut down and rejected by the election agency after allegations that radical extremists had taken over the party.