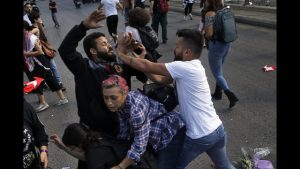 He has fought Israel since the 1990s and killed many fighters in Syria’s civil war, but the increasing difficulty of working-class life in Lebanon and a popular revolt against the country’s leaders has forced Abu Hussein to reevaluate his decades-long service to Hezbollah, like reported by thedailybeast.com.

The group whose name translates as “the Party of God” has been branded a terrorist organization by the United States since the 1980s. Backed by Iran, it is more powerful than Lebanon’s military and holds a political veto on state policies. The Trump White House has made Hezbollah a prime target in its “Maximum Pressure” campaign against Iran, which seeks to squeeze the Islamic Republic economically until it signs a new, Trump-approved deal covering not only nukes, but ending Iran’s support for militias like Hezbollah. Sanctions have targeted the party’s members in Lebanon’s parliament and a Lebanese bank accused of involvement managing Hezbollah accounts.

But the U.S. efforts have only added pressure to Lebanon’s economic crisis. And Iran has many ways to fight back.

“Iran sees Lebanon as an important arena in the duel with Washington and will not sacrifice its prize horse Hezbollah no matter the cost,” says Raghida Dergham, founder of the Beirut Institute, an independent think tank. The cost to the country of an effort to crush the uprising could be enormous, and some Hezbollah fighters want no part of it.

I have met Abu Hussein several times over the last four years, but this conversation in the southern suburbs of Beirut is like none we’ve had before. Regardless of how grim the fighting had been in Syria, when he came back home Abu Hussein was always unwaveringly loyal and ideologically committed to the party. (He uses a pseudonym here because Hezbollah fighters are barred from speaking to Western media.)

Now he is frustrated with Hezbollah’s response to the widespread discontent in the streets by masses of people fed up with corruption, austerity and the high cost of living. After years fighting abroad as the commander of a rapid response unit that numbered as many as 200 fighters, it is domestic rather than regional issues that pushed him to abandon the movement.

Two months ago, as Israel and Lebanon stood on the brink of war after an exchange of cross-border fire, Abu Hussein was part of redeployment from Syria, leading patrols and reconnaissance missions on Lebanon’s southern border with Israel.

But then, last month, working- and middle-class people from across Lebanon took to the streets condemning a ruling political class still lingering since the 1975-1990 civil war and enriching itself as the country’s economy collapsed.

Rather than the traditional hurling of blame across the sectarian divide of Lebanon’s confessional political system, this time Christians, Druze, Shia and Sunni Muslims condemned the failures of their own leaders, and for Abu Hussein, something changed. Now he says he refuses to go back to Syria, has not gone on patrol in the south since the protests started, and won’t be mobilized in Beirut.

“The protesters’ demands are 100 percent legitimate and they have no other choice to get their demands met,” he says of a movement that calls for an end to the sectarian system that Hezbollah relies on to leverage power. He contends that a growing number of his comrades in arms support the demonstrations and roadblocks where people chant “all of them means all of them.”

“Hezbollah made a major mistake; they thought they were too big for Lebanon,” says Abu Hussein of a movement focused on expanding regional military influence while its Shia working class base endured some of the worst of the country’s economic pain. “They never thought people would rebel against them with this force and now they feel the heat.”

For Hezbollah, a movement inspired by the Iranian revolution and loyal to the Islamic Republic, this loss of confidence is a problem its military successes can’t solve.

In southern cities like Nabatieh and in Bekaa valley towns where Hezbollah competes with Parliamentary Speaker Nabih Berri’s Amal movement for Shia support, demonstrators have cursed both Berri and Hezbollah leader Hassan Nasrallah. Young people from the low-income Shia-majority Beirut suburb of Dahieh have joined the protests in the capital center around Martyrs’ Square.

“There were the kids of Hezbollah MPs telling their fathers that the people’s demands should be heard,” says the commander, emphatically describing the mood among Hezbollah’s core constituents. He is careful to keep Nasrallah above reproach, blaming those around him and his tenuous ally, Berri, who went from warlord to parliamentary speaker in 1992 and has held the position ever since.

But Abu Hussein does not mince words about Nasrallah’s response to the uprising.

In a televised addresses broadcast across the country on Oct. 25, Nasrallah tried at first to dismiss the protests as a hostile foreign plot while claiming he would not accept the government or president’s resignation. Three days after the government collapsed, on Nov. 1, he went on air again, this time to begrudgingly accept the reality of the Hariri led cabinet resignation. He tried to distance himself from his previous comments about the protests being a Western and Israeli plot and called for dialogue.

Unable to to appear in public because of the threat of Israeli assassination, the long serving secretary general always makes his televised addresses from an undisclosed location.

“Hezbollah can say what it wants,” the commander tells me, annoyed by the allegations of foreign interference. He says he knows many people who have been joining the protests and that the demonstrators are changing people’s minds.

The clanging of pots and pans echoing nightly off apartment buildings across Beirut has become the latest sound of discontent ringing out here, a month into the country’s popular revolt. Lebanon’s economic crisis continues to deepen, with banks restricting withdrawals and transfers abroad while the gap between the official and street-traded exchange rate of the Lebanese lira, which is pegged to the U.S. dollar, grows wider. As protests and political stagnation add to the economic crisis, faith in the established parties continues to dissipate, even among core supporters.

This erosion is not unique to Hezbollah but rather seems to be happening across the establishment’s political divide, threatening the future of all parties, whether allied to Iran and Syria or the West and the Gulf. It is discontent with a system of proxy politics that exploits sectarian divides while ignoring the basic needs of people that is threatening to upend politics and power in Lebanon.

“There is a paradigm shift in the way people are thinking. People have been able to move away from the traditional parties that they have been attached to and there is a general dislike of party partisanship,” says Ahmad Mousalli, a political science professor and specialist in Islamic movements at the American University of Beirut.

“Most of the people on the ground these days have not been through the civil war in Lebanon, but they have known nothing but these corrupt cronies,” he continues.

At the same time, the parties have continued to fight over which of their traditional blocks will dominate in the new government, each claiming to carry the street’s anti-corruption, economic reformist goals and demands for a secular civil democracy.

“They are trying to ride the wave in one way or another,” says Mousalli before adding, “I don’t think the population at large want this anymore.”

Mousalli notes that this trend has impacted Hezbollah, but argues that the intense ideological conviction of its members, especially its fighters, puts it in better shape than other established parties in a political system where loyalty is usually based on patronage.

While Abu Hussein says he is among an increasing number of fighters leaving the organization, Abu Abdullah, who also declines to use his name because of Hezbollah’s restrictions on its fighters talking to the media, is unwavering in his support. He fought Israel in 2006, then bolstered the Assad regime in Syria’s civil war, and now he trains fighters.

Describing Hezbollah units across the country as on “full alert,” he says they are looking out for American or Israeli acts of destabilization through the protests. Abu Abdullah also knows people from Dahieh going to the protests and hears about discontent with Hezbollah along with the rest of the political class, but he has listened to Nasrallah’s accusations and is convinced that the protests are the result of foreign agitation.

“The Israelis and Americans feel they can enter through these protests and we aren’t going to let them,” he says decisively.

In 2008, Hezbollah fighters took over the streets in Beirut in a display of their military dominance and effective control of the country, but Abu Abdullah states univocally that Hezbollah has no intention of doing that at the moment.

Mousalli concurs, saying that any military action against Lebanon’s people would likely only create bigger problems for Hezbollah, exacerbating internal divisions and alienating its base.

Still, Abu Abdullah contends Hezbollah will not allow the collapse of a sectarian system that it uses to secure its interests while avoiding the international isolation for Lebanon that would come from a party the U.S. has long labeled a terrorist organization officially running the country. It’s a position he’s willing to kill for and he says he’s ready to do whatever his commanders deem necessary.

“If I get an order and a fatwa to shoot the people,” he says, “then yes, I’ll shoot my brother.”

For Abu Hussein, there is no order or religious decree that could make him turn on his people and he would sooner abandon his post than help Hezbollah use its might against its own. For Hezbollah, concerns that the number of Abu Husseins is growing in its ranks may be one reason its reaction, so far, has remained political.