You are here: Home / Mediterranean / Lebanon’s biggest problem is Nasrallah 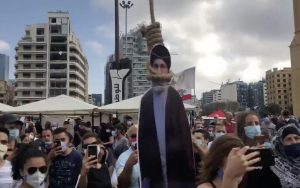 “While Nasrallah is our greatest enemy to the north, he is Lebanon’s biggest problem from within Lebanon. We see the tragedy that happened in Lebanon… just think about what would happen if that would be repeated with Iranian weapons in Lebanese villages,” he said. “We are dealing with enemies who are operating and storing weapons in a civilian environment. If we have no choice but to fight, it might have difficult implications.”

“The fact is that in Lebanon there are homes with a guest room and a missile room. And when that missile explodes, the guest room won’t stay intact and Lebanese society will pay a heavy price,” he said.

Gantz also said that Israel needs to continue to take action with the rest of the world to prevent Iran from getting nuclear weapons. He said Israel must stop Iran from opening a terror branch in Syria and is working against Tehran from establishing itself in the war-torn country and other countries in the region through a variety of means.

“Iran is continuing to try to achieve nuclear capabilities. It has proxies in many countries around the world and in the region. We must not ignore this danger,” he said, adding that “continuing pressure on Iran and our determined actions to continue the embargo on Iran must remain a top priority.”

Addressing the current fight over the state budget, Gantz said that political stability is necessary in light of regional realities. He said the IDF needed the certainty of a long-term budget to be able to function better. He recalled that as IDF chief of staff, he prepared three different plans, and none of them were given a budget.

According to him, the “failure to approve a multi-year plan for the IDF is a criminal inefficiency.”

“Once there is a stable budget, the system is able to function efficiently, and utilize the resources well within itself and with the defense industries,” Gantz said.

Due to the country’s successive elections and political stalemate, Israel’s military has had no budget for the past two years and has been operating on monthly allowances based on a twelfth of its 2018 budget.

With no budget, the IDF had to delay procurement and long-term projects and cancel training programs.

While the military’s budget for the Momentum multi-year plan has not yet been agreed upon with the Finance Ministry, the IDF says that the resources available to it along with changes in internal priorities will allow the army to implement many of the decisions of the plan.

If not, the military believes that there will be a risk to Israel’s national security.

Gantz also warned that if elections are initiated, a new haredi (ultra-Orthodox) draft bill would not be passed, which he said was very necessary.