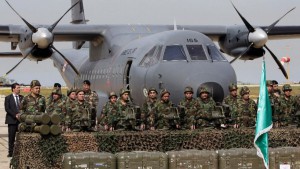 Italian Defense Minister Senator Roberta Pinotti highlighted “intensified” coordination between her country and Lebanon to combat terrorism, saying Italy is committed to training Lebanese security personnel. The minister, who arrived in Beirut Monday, hinted that Italy may deliver a new batch of military equipment to Beirut.

“The collaboration between Italy and Lebanon in terms of fighting terrorism began many decades ago, and has never stopped,” Pinotti told The Daily Star. “With the emergence of new threats, information exchange has been somewhat intensified.”

Pinotti, who is on a two-day official visit to Lebanon, maintained that the country is an essential element to the security of the region. “That’s why the relationship between Italy and Lebanon, in terms of defense, is very important to us,” she said.

For many years now, the minister explained, Italy has been hosting Lebanese Army officers at its military academies to contribute to their professional education.

“Besides training activities, which have been strengthened, Italy may deliver military equipment to Lebanon,” the minister said.

Earlier this year, Italy donated approximately 773,000 euros ($880,000) worth of spare parts for trucks and helicopters to the Lebanese Army.

Speaking about the newly established Italian Military Mission in Lebanon, Pinotti explained that her government decided to use a military facility in the southern area of Assamayah, very close to the area of operations of UNIFIL’s Italian contingent in Shamaa, in order to make use of the logistical resources the battalion already has and to facilitate an increased presence of the Lebanese Army south of the Litani River.

She said training consists of courses for officers and non-commissioned officers (NCOs) in the fields of crowd control, first aid in the battlefield, infrastructure, defense and counter-sniping. “Soon,” the minister added, “we intend to develop training operations in the mountains.”

In terms of fighting terrorism, Italy and Lebanon began collaborating “many decades ago” and coordination has never stopped, Pinotti said.

“With the emergence of new threats, information exchange has been somewhat intensified,” Pinotti noted.

Pinotti said that in light of the fact that Italy is one of the largest contributors to UNIFIL, Lebanon should not expect significant changes in Italy’s contribution in the coming months.

The Italian minister, who visited her country’s contingent in south Lebanon Monday, described UNIFIL’s work as “very difficult,” given the proximity to the conflict in Syria.

“That is why we must absolutely not lower our guard,” she added.

For the Italian defense minister, combatting the phenomenon of the foreign fighters arriving to take part in the conflict in the region is of “vital importance.”

“This is a serious problem for the countries where they fight and for those they come from, because they often try to go back to their countries and make use, through acts of terror, of the technical knowledge they developed.”

For this reason, Pinotti said, Italy has recently intensified the struggle against foreign fighters, by amending national laws to better prosecute this crime.

Moreover, the minister said, Italy considers acts of terrorism committed in other states among crimes to be prosecuted by national authorities.

“In other words, for us,” she said, “the fight against terrorism must ‘cross the borders’ – obviously with full respect for jurisdictions and for the political will of all sovereign states.”

The minister also admitted that the issue of illegal migrants flowing into Europe is “a pressing problem.”

She outlined how migrants seek to reach Europe, but only a small number intend to stay in Italy, and so consequently Rome is working with the other EU countries to share the burden of the migrant influx.

“We should, on the other hand, remember that large numbers of migrants are fleeing situations of war and dictatorship,” she said. “As such, it is our duty to protect them, at least temporarily.”

She said that Lebanon – which itself hosts refugees – can help in the issue of illegal migrants, through the exchange of information to combat human traffickers.

“However,” Pinotti noted, “Lebanon is giving the biggest contribution to the whole world with its great welcoming capacity and tolerance toward the huge number of [Syrian] refugees it hosts.”

As for the nuclear deal recently brokered between Iran and the P5+1 countries, Pinotti described it as a very important step forward, one that will help reduce tensions.

She hoped that, over time, “even Israel will be able to understand the benefits of this agreement.”