You are here: Home / Mediterranean / Lebanon: US Special Forces working in close proximity to Hezbollah 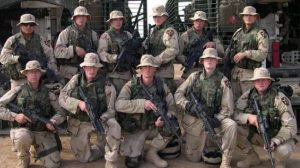 The Pentagon has just confirmed deployment of US Special Forces in Lebanon to support the Lebanese Army in an upcoming coordinated military campaign aimed to clean out an ISIS border pocket in the country’s northwest, like reported by zerohedge.com. Regional media outlets are describing the coming major new offensive as “imminent”. But awkwardly for the US, the fight will necessitate some level of coordination with Hezbollah, which the US considers a terrorist organization.

On July 21st the Lebanese Army in cooperation with Hezbollah intensified operations to root out ISIS from the environs of the Sunni border town of Arsal, while at the same time the Syrian Army attacked from the Syrian side in the western Qalaman mountains. The region’s mountainous terrain and dozen or more refugee camps has made it an ideal place for ISIS and other jihadists to embed themselves throughout much of the Syrian war.

The first major ISIS assault on Arsal came in 2014, which resulted in significant Lebanese troop casualties and kidnappings. Since then the Lebanese Army and Hezbollah have effectively contained ISIS and allied jihadist groups to a barren border zone which includes refugee camps. Syrian refugee presence in and around Arsal numbers in the tens of thousands – many of which have scrambled to flee the area over the past weeks.

The Pentagon announcement came as the US-backed Lebanese Army ramps up efforts to permanently dislodge ISIS presence along its border. “I can confirm the presence of US Special Forces in Lebanon,” Pentagon spokesman Eric Pahon told the US-funded Arabic channel Al-Hurra TV last Thursday.

But Hezbollah has also been an integral part of the Lebanese Army’s Arsal campaign. The two have worked in close coordination with one another as Hezbollah has sealed and contained ISIS expansion on the southern side and the most northerly corner of the border area. On Friday night, Hezbollah leader Hassan Nasrallah gave a speech acknowledging the army’s capability but noting that, “we are at the service of the Lebanese army and under its command… if they ask for any help we will help.” Hezbollah is the only militia regularly coordinating with both the Syrian and Lebanese armies and is expected to join the new assault against ISIS mostly from the Syrian side of the border.

Meanwhile, in border campaigns along the Qalaman region the Lebanese Army has often taken a back seat to the more effective Hezbollah fighters. The US has given the Lebanese military more than $1 billion in security assistance over the past decade. The Pentagon spokesman would not comment on the size of US special operations forces in Lebanon and attempted to distance the US mission from Hezbollah activities along the border. He said that assisting the army “advances a wide range of US interests in the region”.

In spite of what the Pentagon might claim about “countering Hezbollah” the mission will inevitably put US Special Forces advisers in close proximity with the group loyal to Hassan Nasrallah, and which over the past years has been the most effective irregular force defending the Assad government.

But it is yet a further sign that White House priorities have shifted drastically in the Levant. As we reported last week, President Trump was increasingly disgusted with the CIA program to support anti-Assad jihadists, especially after seeing the gruesome video of a CIA vetted group beheading a child. It’s further been widely reported that the United States now sees ISIS as the exclusive target in Syria, and no longer the Syrian Army and its allies. As ISIS front lines now primarily lie with the Syrian Army, the Kurds, and Hezbollah, future American military action against the group will likely involve some level of de facto coordination with pro-Assad factions. Going back to the Bush and Obama administrations, the break up of the so-called “Shia crescent” of Iran-Iraq-Syria-Hezbollah had always been the stated long term strategic priority. US Special Forces coordination with Hezbollah, even if through intermediaries, would certainly signify a monumental shift.

While it’s increasingly looking like Trump has no problem working with anti-ISIS Hezbollah, US ally Israel is sure to balk. Israel has unleashed over a dozen missile attacks on Syrian targets since 2013 frequently claiming to strike Hezbollah weapons arsenals and positions in Syria. It rallied hard for the Obama administration to initiate regime change in Syria, and current and former Israeli officials have long been on record saying they would favor ISIS to Hezbollah.

It is unclear to what extent American forces will participate in the upcoming major offensive. But no matter how the Pentagon tries to spin it, US soldiers will be advising fighters who themselves will work shoulder to shoulder alongside Hezbollah.