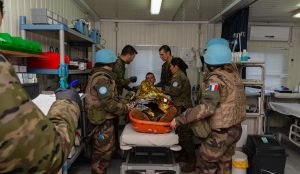 UNIFIL’s French and Spanish peacekeepers participated in the RITEX exercise (Reserve Integration Training Exercise) during which the entire combat rescue chain was mobilized in order to develop the interoperability of medical teams of the Mission’s French and Spanish contingents.

Deployed near the main Spanish base, near Marjayoun in south-eastern Lebanon, the soldiers of the French-led Force Commander Reserve (FCR) of UNIFIL participated in exercise with the aim to strengthen their capacity to maneuver with the UNIFIL contingents of other nationalities.

As part of this large-scale exercise, one of the scenarios included taking care of an injured person.

“The FCR must be able to intervene throughout the UNIFIL area of operation, it is therefore necessary to carry out this type of exercise regularly in order to test the means of communication between the different chains of command and learn to coordinate well,” said Lieutenant Colonel Pierre, chief of operations within the tactical command post of FCR.

Doctor Claire, in charge of controlling the rescue exercise, followed all the stages of treatment. She said: “This exercise makes it possible to repeat the entire rescue chain in combat, from the first echelon with the soldiers who practice the gestures of first aid, passing by the medical auxiliaries and the nurse who stabilize the wounded in order to transport him to the doctors of the Spanish Role 1, to the medical teams in charge of his evacuation by helicopter.”

In the end, the exercise made it possible to highlight the excellent relations with the Spanish contingent as well as the perfect reactivity and coordination of the medical teams of the two countries within the framework of the evacuation of the wounded.

UNIFIL currently has some 10,300 peacekeepers from 45 countries serving for peace in south Lebanon. Of them, 666 are from France and 635 from Spain.