You are here: Home / Mediterranean / Lebanon: Unifil opened a physiotherapy centre in Tyre 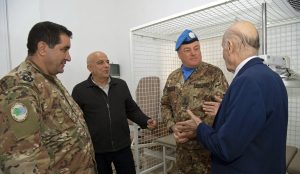 UNIFIL Head of Mission and Force Commander Major General Stefano Del Col joined local officials in opening a physiotherapy centre in Tyre, which received UNIFIL-donated equipment for the service of the local communities.

The physiotherapy centre is run by an NGO called Amel Association, which – for the past 41 years of its existence – has offered medical and development services to the Lebanese people, and spreads awareness on various social issues.

This UNIFIL-supported Quick Impact Project (QIP) will help the Amel Association clinic improve its physiotherapy services for its beneficiaries. The clinic served around 800 patients in 2018, of which 70 per cent were women.

The QIP will also indirectly help the Lebanese Ministry of Public Health in reaching out to more residents and help them have access to better medical care.

The President of the Tyre Union of Municipalities, Hassan Dbouk, and the President of Amel Association, Dr. Kamel Mhanna, joined the UNIFIL head in opening the project today.

In his remarks, Major General Del Col said the project represents a “fruitful cooperation” among UNIFIL, the local authorities and the Amel Association.

“We decided to partner with Amel for this QIP because of its credibility, but also because it received the confidence and recommendation of Tyre municipality,” he said. “We do our best within our limited resources, to help the local communities.”

UNIFIL QIPs are small-scale, rapidly implementable projects which are intended to address some of the most pressing needs of the host population and support local authorities while strengthening links between UNIFIL and local communities. These are critical to the implementation of its mandate in accordance with Security Council resolution 1701.