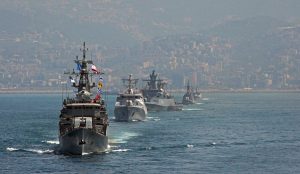 UNIFIL naval peacekeepers, operating in the Lebanese territorial waters in support of the Lebanese Armed Forces (LAF) Navy, reached a historic milestone this month with 100,000 ships hailed since 2006.

The Maritime Task Force (MTF) reached the milestone on 5 January 2020 with the hailing of the Liberia-flagged container ship “MAIRA XL” off the coast of Beirut. Among the hailed ships, MTF referred more than 14,400 ships to the Lebanese authorities for further inspections.

According to the MTF Commander, Rear Admiral Eduardo Augusto Wieland, this mark denotes MTF efforts in the implementation of UNIFIL mandate, and the significant contribution of the “sailors of peace” or “Pacis Nautae” in Latin, since 2006.

As the UN Peacekeeping’s first and only major naval component, UNIFIL MTF was deployed on 15 October 2006 at the request of the Government of Lebanon. A total of 15 countries have contributed to the MTF, which currently has about more than 750 naval peacekeepers and six ships – one each from Bangladesh, Brazil, Germany, Greece, Indonesia and Turkey.

UNIFIL MTF supports the Lebanese Navy in preventing the unauthorized entry of arms or related materiel by sea into Lebanon. Its mission also focuses on assisting Lebanon raise its own naval forces to control and protect Lebanon’s seaways and territorial waters. In order to achieve that, MTF carries out a range of different training courses and coordinated exercises with the LAF Navy in order to prepare it to assume all duties required for maritime security, protecting Lebanon’s sovereignty and supporting economic investment.