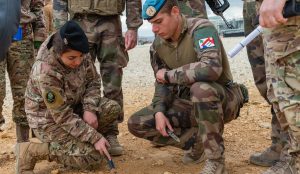 The 20 February event saw both theoretical and practical sessions. French deminers from the UNIFIL Force Commander’s Reserve (FCR) also presented the mine detection equipment and tools they have available during their missions.

The participants were able to test the non-magnetic probe with Sergeant Loïc, group leader within the FCR combat engineer’s section.

“The probe that we use is very sensitive and makes it possible to detect the presence of mines. Depending on the experience and dexterity of the sapper, we will be able to differentiate the type of object probed, for example if it is a smooth or grainy surface, if the object probed is malleable or solid,” he said. “This requires the sapper a lot of concentration and a great rigour to probe the ground with meticulousness.”

In another workshop, Sergeant Romain highlighted the fundamentals that each soldier must master when a mine is detected in his/her area: “If a mine is discovered, we consider that the entire area is susceptible to be polluted. We then apply the technique of the ‘turning square’ which allows soldiers to leave the danger zone in safety.”

The UNIFIL-LAF cooperation around demining dates back to 2006. In the wake of the summer war that year and till 2010, UNIFIL deminers conducted humanitarian demining in order to protect civilians and to facilitate safe access to dwellings and agricultural land. Due to operational requirements of its mandate, these activities were suspended in 2010.

But after a decade, UNIFIL and the LAF signed a Memorandum of Understanding (MoU) on 30 January 2020 allowing for the two forces to enhance cooperation in humanitarian demining within the UN Mission’s area of operation.

The MoU sets out a framework of cooperation for UNIFIL assistance to humanitarian demining operations carried out by the LAF’s Lebanon Mine Action Centre (LMAC).

Despite progress, large swathes of land in south Lebanon are still contaminated with landmines.

UNIFIL French peacekeepers conduct patrols daily in coordination with the LAF, and can sometimes be confronted with remnants of war (mines and explosives). Raising awareness of the risks and the procedures applied in the event of danger therefore remain necessary to preserve the safety of soldiers.