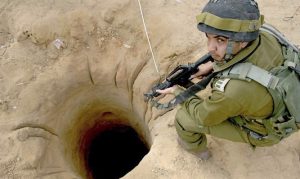 UNIFIL, the United Nations force that is supposed to keep the peace between Israel and Lebanon, acknowledged the existence of a Hezbollah terror tunnel inside of Israeli territory, The Times of Israel reported Thursday.

In a statement released after being shown a tunnel near the Blue Line that divides Israel and Lebanon, UNIFIL said, “Based on the site inspection, UNIFIL can confirm the existence of a tunnel at the location.”

UNIFIL said that it would get the parties involved to “pursue urgent follow-up action,” and that it would “communicate its preliminary findings to the appropriate authorities in Lebanon.”

On Wednesday, UNIFIL held a tripartite meeting with the IDF and Lebanese Armed Forces at which it was decided that the force would send “a technical team to Israel on 6 December to ascertain the facts.”

A military tunnel in south Lebanon would be a violation of UN Security Council Resolution 1701, which prohibits any armed force in southern Lebanon south of the Litani river except for the LAF.

The IDF located a second Hezbollah terror tunnel and called on the LAF and UNIFIL to destroy it. The second tunnel started in the Lebanese village of Ramyeh and crossed into Israel near Zarit. The IDF said that it was certain that the tunnel crossed into Israel, but could not locate the entrance due to the terrain and the weather.

The first tunnel reported in Israel’s Operation Northern Shield went near the northern city of Metulla. It is thought that Hezbollah’s goal was to send troops in and cut off the city from the rest of Israel.

Israeli officials are saying that the Hezbollah tunnels are wide enough to accommodate battalions, allowing terrorists from Hezbollah to “carry out killing sprees and kidnappings and to capture Israeli towns and villages.”

In a diplomatic effort to explain the threat Israel is facing and why it may have to attack Lebanon, Israeli Prime Minister Benjamin Netanyahu briefed more than a dozen ambassadors on the situation in the north. Among the ambassadors who Netanyahu addressed were those from the European Union, France, the UK, Russia, Hungary, Ethiopia, Ivory Coast, and Poland.

The British Ambassador to Israel David Quarrey stated that the “UK condemns such tunnels as blatant and destabilising violation of UN resolutions.”

Emanuele Giaufret, the EU Ambassador to Israel said, “Important to understand facts and perspectives. Israel has the right to safeguard the security of its citizens.”

In June of last year, Aviv Kochavi, the incoming IDF Chief of Staff rebuked the then-UNIFIL commander for saying that “the situation is good,” along the border between Israel and Lebanon. Kochavi retorted, “I’m sorry my friend, we think entirely differently, UNIFIL don’t enter villages and cities [and are therefore not as aware of the situation as the IDF is].”