You are here: Home / Analysis / Lebanon: UN stuck on the fence between Israel and Hezbollah 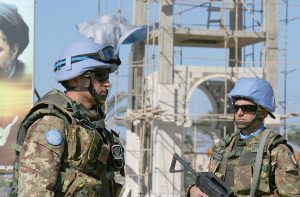 A vote is set to take place at the UN Security Council on August 31 to renew the mandate of the United Nations Interim Force In Lebanon (UNIFIL), which was formed in 1978 in order to “restore international peace and security” to the volatile border region between Israel and Lebanon, like reported by jpost.com .

In advance, US Ambassador to the UN Nikki Haley called for action to “enhance [UNIFIL’s] efforts to prevent the spread of illegal arms…which are almost entirely in the hands of Hezbollah terrorists…[and] threaten the security and stability of the region.” Her statements came after UN Secretary-General Antonio Guterres—who will soon visit the Middle East—confirmed his intention to beef up UNIFIL’s efforts to combat “the illegal presence of armed personnel, weapons or infrastructure inside its area of operations.”

It is a scenario that UNIFIL was created to prevent in the first place, thus raising doubts about its ability to effectively fulfill even more demanding—if not altogether unrealistic—duties in one of the world’s most rapidly changing and explosive conflict zones.In the decade prior to UNIFIL’s establishment, Israel was engaged in asymmetrical warfare against Palestinian groups that had established a “quasi-state” in southern Lebanon, using the area as a base for raids on civilian targets in Israel as well as worldwide terror attacks. In 1978, Israel launched an offensive in Lebanon after the “Coastal Road Massacre,” in which members of the Fatah faction of the Palestine Liberation Organization—headed by Yasser Arafat—hijacked a civilian bus before killing 38 Israeli passengers, including 13 children. The ensuing conflict—code-named by Israel “Operation Litani”—achieved the strategic objective of forcing PLO fighters north of the Litani River. Subsequent to the withdrawal of most Israeli troops in accordance with Security Council resolutions 425 and 426, UNIFIL filled the void and has maintained a presence ever since.

Initially, UNIFIL’s objective was to “confirm the withdrawal of Israeli forces from southern Lebanon [while] assist[ing] the government of Lebanon in ensuring the return of its effective authority in the area.” But its mandate would be adjusted twice in response to changing circumstances; first, in the wake of the 1982 war between Israel and Palestinian organizations that had regrouped in Lebanon—which led to the IDF’s occupation of a “security zone” in the country’s south until 2000—and again after the 2006 conflagration between Israel and Hezbollah.

Following that war (known in Israel as The Second Lebanon War), the Security Council significantly boosted UNIFIL’s mandate to include laying the groundwork for an enduring “full cessation of hostilities.” To this end, resolution 1701 called for up to 15,000 UN personnel to be deployed to southern Lebanon (the current force numbers some 10,500) in order to assist the Lebanese Armed Forces to secure the border. New rules of engagement allowed UNIFIL troops to open fire in cases of self-defense or to protect civilians. Most important, the peacekeepers were tasked with overseeing the “disarmament of all armed groups” other than Lebanese government forces, as well as “ensur[ing] that its area of operations is not utilized for hostile activities of any kind…[by] prevent[ing] the entry in[to] Lebanon of arms or related material.”

According to Brig. Gen. (ret.) Michael Herzog, who held senior positions in Israel’s Defense Ministry under the stewardships of Ehud Barak, Amir Peretz, Shaul Mofaz, and Binyamin Ben-Eliezer, “UNIFIL has definitely not fulfilled the key element of its mandate—to prevent the deployment of unauthorized armed elements to southern Lebanon.” Instead, he explained to The Media Line, “UNIFIL is a kind of observer group that monitors the existing ceasefire, but is very limited in the way it operates and is unwilling to confront Hezbollah.”

In the result, Hezbollah has been able to rebuild its operational infrastructure, which poses the biggest long-term threat to Israel. In the short-term, though, most analysts agree that the Shiite group is too engaged in the Syrian war to open up another front, thus the border with Israel has remained relatively calm. While UNIFIL points to this condition as proof of the fulfillment of its mandate, Herzog stressed that the “quiet” is, rather, mainly attributable to a current desire by both parties to avoid confrontation.

“If there is an escalation towards war,” he elaborated, “UNIFIL will be worthless.”

Another problem is the apparent increase in coordination between the Lebanese army—with which UNIFIL works closely—and Hezbollah, which also dominates the national government. The blurring of the lines between terror group and state could have negative consequences for Israel, as the Lebanese army could provide legitimate cover for Hezbollah in a future confrontation; a reality which recently prompted Israel to warn that, in such an eventuality, no elements within Lebanon will be granted automatic immunity.

Regarding Israel’s options, Herzog, an International Fellow at the Washington Institute for Near East Policy, noted that “there are ideas to amend resolution 1701 in conjunction with the US leadership, but this may be impossible. Overall, it is unlikely that Israel can bring about a change in UNIFIL’s mandate.”

According to Moshe Arens, who served as Israel’s defense minister on three separate occasions during the 1980s and ’90s, there may be no use in trying anyways. “Even at the beginning UNIFIL was not doing its job, as the PLO was rocketing Israel from Lebanon. And today, Lebanon is in the hands of Hezbollah, which is running amok with UNIFIL incapable of functioning at all.” In the result, he suggested to The Media Line another course of action; namely, that “Israel take care of itself and its population by placing its trust in the IDF and not UNIFIL.”

In this respect, Arens stressed that “Israel does act now and then [by conducting airstrikes within Lebanese airspace] to prevent advanced weapons from reaching Hezbollah.”

When contacted, UNIFIL was unable to provide a statement within 36 hours (while it has four Public Information Officers, its lone authorized spokesperson was not available). Nevertheless, according to its website, the organization is involved in humanitarian work that has indeed benefited the local population. UNIFIL’s Civil Affairs Office assists in strengthening societal organizations by providing “free medical, dental, veterinary and other such services.” UNIFIL likewise supports various training programs for communities in the fields of “computers, languages, cooking, yoga, martial arts, etc.”

Furthermore, the peacekeeping force has taken a proactive role in de-mining southern Lebanon, thereby saving lives. On the flip side, UNIFIL has incurred more than 250 fatalities in its history. And as regards Israeli criticism, an oft-cited quote by former spokesperson Timur Goksel sheds light on the body’s position: “UNIFIL is a peacekeeping force. It’s not an Israeli combat force or an anti-terror force, as they would like it to be. As long as we don’t serve their direct interests, they are going to denigrate it as much as they can.”

To what degree Israel—as opposed to UNIFIL—is responsible for the current predicament is another matter of debate: Should successive Israeli governments have depended on an international peacekeeping force, of dubious record, to oversee such a crucial aspect of the country’s security? The question is especially poignant given the historical failures of similar missions across the globe, including, somewhat ironically, that of the United Nations Emergency Force, which was deployed to the Sinai Peninsula in the aftermath of the Suez Crisis but was summarily expelled by Egypt just weeks before the 1967 war with Israel. Additionally, as Arens pointed out, “the beginning of the problem was the military withdrawal from southern Lebanon under [then-Israeli prime minister] Ehud Barak in 2000, which effectively handed control of the country over to Hezbollah.”

Irrespective of the blame-game, most agree on one point: resolution 1701 has not brought about its intended effects. Hezbollah, with support from its patron Iran, has since amassed a huge arsenal of weapons, which now threaten all of Israel (Hezbollah has also used its vast armaments in the Syria conflict, which likely never would have reached such magnitude had the Lebanese Shiite group been defanged). And while Israel’s shared border with Lebanon has remained largely calm for a decade, this is liable to change at some point given historical precedent.

Enter Nikki Haley, who in June visited the Israel-Lebanon border, where she was provided with special equipment by the IDF that enabled her to discern observation points erected by Hezbollah, under the guise of an environmental organization called “Green Without Borders.” When UNIFIL Commander Irish Maj. Gen. Michael Beary was questioned by Haley about the posts located south of the Litani River, his retort was that the situation was stable and did not require further intervention. This led to a widely reported heated—and public—argument between Beary and Israeli Maj. Gen. Aviv Kochavi, the IDF’s Deputy Chief of Staff, who accused UNIFIL of not doing its job properly.

Within this context, former Israeli ambassador to the UN Ron Prosor acknowledged to The Media Line that Haley faces an uphill battle. “While UNIFIL repeatedly says that it has not been able to detect or report any weapons transfers into Lebanon, you don’t have to be Agatha Christie to know that this has happened,” he quipped. In fact, Hezbollah’s standing army has increased from 20,000 fighters in 2006 to 45,000 in 2016, whereas the number of missiles it possesses has skyrocketed from around 13,000 in 2006 to more than 120,000 today (the maximum range has expanded over this time from 100km to 400km).

To reverse the tide, Amb. Prosor contended that “the US should seek a UN Security Council resolution amending 1701 and providing UNIFIL with explicit powers to disarm Hezbollah and demilitarize south Lebanon under Chapter 7 of the UN charter, the section that deals with peace enforcement.” He also highlights the fact that American taxpayers are on the hook for 43% of UNIFIL’s $488 million budget in 2017, and suggested that “Congress make that funding conditional on performance.”

Holding UNIFIL to account would mark a significant departure from the four-decades-long approach of simply rubber-stamping its activities, which have not put an end to the cycle of violence. To avoid a Third Lebanon War, some out-of-the-box thinking is indeed in tall order, so that a semblance of sustainable peaceful order might finally be achieved.