You are here: Home / Mediterranean / Lebanon: the threat of returning Islamic extremists 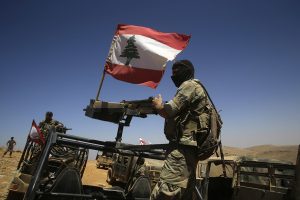 Lebanon faces a new security threat embodied by extremists, who are currently returning from battlefields where they fought in the ranks of terrorist organizations in Syria and Iraq, like reported by aawsat.com.

The threat was intensified on Monday after the Lebanese army announced the killing of a military officer and a wanted suspect in a shootout in the northern city of Tripoli.

The military did not reveal the charges that the suspect was wanted for, only describing him as a “terrorist” fugitive.

An Army Command statement said that the military had killed terrorist Hajer al-Abdullah after an exchange of gunfire during a search carried out by an army unit in Bab al-Tabbaneh in Tripoli.

His brother Bilal was arrested in the raid.

“Weapons and ammunition were seized and an investigation was opened under the supervision of the competent judicial authorities,” continued the statement.

A military source told Asharq Al-Awsat that those extremists were illegally smuggled into Lebanon from Syria.

He explained that although the army is enforcing “strict measures” along the borders with Syria, those terrorists benefit from the weather conditions and the difficult terrain to illegally enter Lebanon.

He said that Abdullah “fought in the ranks of ISIS in Syria and had returned to Lebanon 15 days ago.”

The military source said that as of yet there is no information about the exact number of extremists who had returned to Lebanon from Syria and Iraq.

“However, the Lebanese army and its intelligence are closely following-up on the matter,” he said.