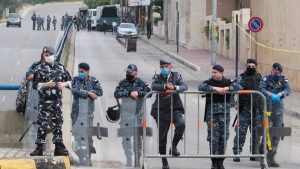 A suicide bombing carried out by a suspect in a security incident that killed three people in the town of Kaftoun in northern Lebanon last week renewed fears of sleeper cells belonging to extremist organizations that could exploit the tense situation in the country to revive their activities, like reported by aawsat.com.

Those fears, however, are rejected by security sources, who stressed that the “success achieved by the Lebanese authorities in terms of proactive security is still effective and possesses the full ability to maintain stability.”

On the night of Aug. 21, four people driving a car without a license plate opened fire at three members of the municipal guard in the northern town of Kaftoun, killing them instantly, before fleeing to an unknown destination.

Subsequently, the joint security force in the Beddawi Palestinian refugee in northern Lebanon handed over one of the wanted people to the Lebanese authorities at dawn on Sunday.

On Monday, a force from the Intelligence Bureau of the Internal Security Forces raided an apartment occupied by displaced Syrians in an area in the North, with the aim to arrest a suspect in the crime. But the wanted man detonated himself with explosives before the forces could arrest him.

The National News Agency (NNA) reported that the ISF cordoned off the area and confiscated two laptop computers from the apartment. It added that a number of people were arrested during raids in several refugee camps across the North.

Judicial sources told Asharq Al-Awsat that the wanted person who blew himself up was a 40-year-old Syrian, who had previously served a prison sentence on charges of belonging to ISIS.

“The other suspect, who was handed over to the Lebanese authorities at dawn on Sunday, also had extremist tendencies,” according to the sources.

They added that the investigations into the Kaftoun crime showed the presence of two other vehicles that accompanied the suspects’ car. One of those cars transported the perpetrators to a safe place. The sources asserted that they “were planning to carry out a terrorist act before they clashed with the municipal guards, who prevented them from executing their operation.”

Head of the Middle East Center for Studies, Dr. Hisham Jaber, said sleeper cells were usually “present, and they wake up when they find opportunity or a security vacuum.”

But he asserted that these factors “are not available in Lebanon, due to the constant vigilance of the services.”

Jaber, a retired Lebanese Army brigadier general, noted that Lebanon “has succeeded since 2014 in proactive security,” referring to the concerted efforts by “the security services to exchange information in an integrated manner.”