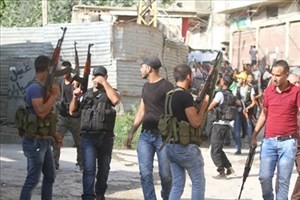 Several people were wounded Thursday afternoon as armed clashes renewed at the Ain el-Hilweh Palestinian refugee camp in the southern city of Sidon.

The fighting between the mainstream Fatah Movement and the hardline Islamist group Jund al-Sham erupted after the funeral of Samer Hmeid – aka Samer Nejmeh – and Mahmoud Abdul Karim Saleh, who both were killed in Wednesday’s violence, state-run National News Agency reported.

“Clashes broke out on the al-Sifsaf-al-Briksat frontier before spreading to the Taytaba-Arab Zbeid frontier,” NNA said, noting that “machineguns, shoulder-fired rockets and hand grenades” were being used in the fighting.

Dozens of families who were trapped in their homes in the Arab Zbeid area were urging officials to exert efforts to halt the fighting, the agency added.

Wednesday’s unrest resulted in the death of three people and the injury of at least six others.