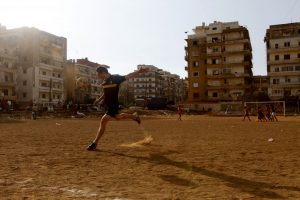 Lebanese security forces have broken up a Daesh cell operating under the disguise of a football team but actually planning to carry out acts of terror in the Arab country through recruitment of young men.

The General Directorate of the Lebanese General Security, in a statement released on Wednesday, announced that four Syrian members of the Takfiri group, nationals identified by their initials as B.S., Kh.S., M.Z. and Y.Z., had been recently arrested during a counter-terrorism operation.

The statement noted that the detainees have confessed to links to Daesh, and that B.S has already sent his wife to Syria to join her family, who are also loyalists to the Takfiri militant group.

B.S. then pledged his allegiance to Daesh in front of his wife’s brother Mohammad, who is believed to be a Daesh terrorist in Syria’s troubled and militant-held northern city of Raqqah, which has been the de facto capital of the terror network.

He was then put through to Abu Omar al-Shami, who is believed to be a Daesh “immigration officer” in Raqqah.

Having found it rather difficult to move between Syria and Lebanon, members of the terror cell decided to create a Daesh network inside Lebanon. Their goal was to recruit young Lebanese and Syrian men in the hope of forming numerous Daesh sleeper cells across Lebanon.

The suspects are believed to have recruited numerous young men to join them under the pretext that they were starting a football team.

The team’s training sessions, however, were regularly interrupted by religious lessons that focused heavily on indoctrinating the new recruits with Daesh’s extremist ideology.

All the four suspects have been referred to the judiciary for further interrogation, and work is underway to arrest the remaining members of the terror network.

Lebanon has often seen the infiltration of Takfiri elements from neighboring Syria into its territory, where they target the civilian population or security forces with bombings.

In November 2015, more than 40 people were killed and dozens of others wounded after two bombings, claimed by Daesh, targeted a security post in Bourj el-Barajneh area.

Assisting army forces, fighters with the Lebanese Hezbollah resistance movement have so far fended off several attacks by Daesh. Hezbollah says its mission in Syria is aimed at preventing the spillover of the crisis into Lebanon.