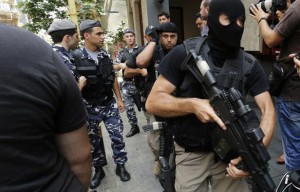 Lebanese security has foiled an ISIS-directed terror plot aiming to target Shiite Muslims in the run up to the holy day of Ashura, according to a local daily.

The terror suspect confessed that he was preparing to blow himself up on October 7 in “one of the largest mosques in Dahiyeh” during Muslim Friday communal prayers.

According to the report, another would-be suicide bomber was apprehended by Lebanese army intelligence, with both of them being dispatched by an ISIS official in the jihadist organization’s de-facto capital of Raqqa, although neither of the suspects knew of each other.

Meanwhile, General Security on Thursday also arrested a number of suspects at a warehouse belonging to a person “affiliated to the Nusra Front” who operated as an arms dealer.

The security officers who raided the site in the mountain town of Bhamdoun discovered “detonators and hand grenades” in addition to a low-flying drone, which As-Safir said was “capable of carrying a small explosive.”

Although the article’s headline touted that security forces seized an “explosive plane,” it did not go into the technical specifications of the device, referring to it as a “fly-cam,” or “small camera attacked to a vehicle that flies at low altitudes.”

The arrested arms dealer in the warehouse admitted that he “sold explosives to more than one organization,” while allegedly adding that he also sold “five” of the “explosive flying cameras” to the Nusra Front—the former name of Jabhat Fatah al-Sham—the day before the raid.