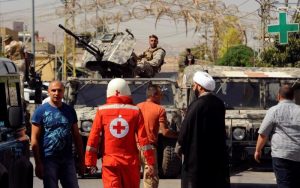 Five suicide bombers have blown themselves up during a raid by Lebanese troops on refugee camps near the Syrian border, Lebanon’s army said.

Three soldiers were wounded by the blasts, while four others were hurt when an attacker threw a hand grenade, the army said.

It happened during an operation to search for militants and weapons in an area near the town of Arsal.

The area is home to thousands of refugees from the war in Syria and was the scene of an attack in 2014, when more than two dozen members of the Lebanese security forces were seized by militants from al-Qaeda and so-called Islamic State.

In the raid on Friday, four militants blew themselves up in one refugee camp, and a fifth struck in another camp, the army said.

The operation was still under way, it said.