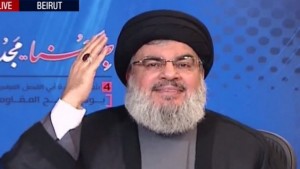 The leader of the Lebanon-based Hezbollah terror group said Tuesday that powers are acting to undermine Arab regimes and their armies for the benefit of Israel, and predicted that the anti-Western “axis of resistance” will be the eventual victor in the various regional conflicts it is facing, like reported by toi.com.

The comments came as Lebanon’s newly minted prime minister Saad Hariri said resisting Israel and struggling to regain to the Har Dov area from the Jewish state would be a central plank of his government’s agenda.

“After the resistance humiliated the Israeli army in Lebanon and Palestine, there are efforts to destroy the region’s armies for the sake of the Israeli army,” he added.

The report did not say if Nasrallah identified which countries he believes are acting on behalf of Israel.

His comments apparently referred to the US-led coalition airstrikes backing moderate Syrian rebel groups battling to bring down Syrian President Bashar Assad’s regime in a bloody civil war that has seen the emergence of multiple sectarian militias, including some affiliated with the Islamic State group and al-Qaeda.

Hezbollah, an Iran-proxy, is fighting on behalf of the Syrian regime, backed by Russian airstrikes. Turkey has also entered the fray, sending its forces into a Syrian-Kurdish held area on its border with Syria and taking control of territory.

Nasrallah looked forward to the “axis of resistance” — the anti-Israel, anti-Western alliance of Iran, Syria, and Hezbollah — defeating its global enemies.

“The axis of resistance will emerge victorious and stronger from this global war against it in all countries,” he said.

Earlier, Hariri said that “resistance” to Israel and recouping the Mount Dov region, known in Lebanon as the Shebaa Farms, will be key parts of his government’s policy, during a meeting of the Lebanese Parliament.

Hariri, who was previously prime minister between 2009 and 2011, returned to the premiership in November as part of an agreement that saw him throw his support behind Michael Aoun, Hezbollah’s candidate for the presidency.

“We will spare no resistance to liberate the remaining occupied territories and to defend ourselves from the enemy who covets our lands,” said Hariri, who was presenting his newly appointed cabinet’s policy agenda to the parliament in Beirut, the Hebrew-language Ynet website reported.

He said Lebanese citizens have “the right to resist [Israel] and return occupied territories from Israeli hands.” Furthermore, he said, Lebanon “is obliged to liberate the Shebaa Farms” — the Arab states’ name for Mount Dov, a small patch of land captured by Israel from Syria in 1967.

Lebanon maintains that the strip of land is a part of Lebanon, despite it having been under Syrian control from the 1950s until it was captured and later annexed as part of the Golan Heights by Israel in 1981.

Neither Israel, Syria or the United Nations recognize Mount Dov as Lebanese territory.

Hezbollah has used the dispute over the area to justify its continued “resistance” to Israel and to maintain a its large arsenal, which includes tens of thousands of rockets aimed toward the Jewish State.